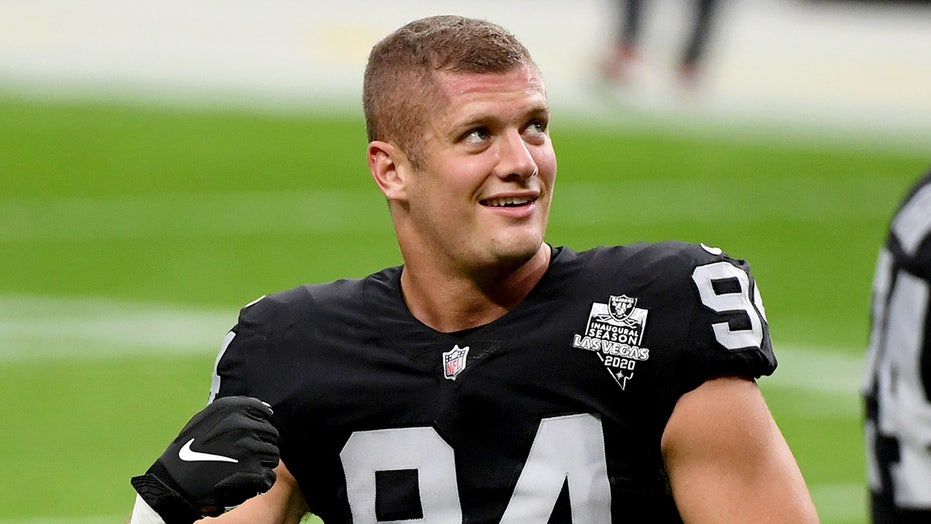 Carl Nassib, a walk-on at Penn State, was selected by the Cleveland Browns in the third round of the 2016 NFL Draft.

Nassib, who was born in West Chester, Pennsylvania, was a unanimous All-American and recognized as the Big Ten Nagurski-Woodson Defensive Player of the Year during his stellar senior season as a member of the Nittany Lions. He set the program's single-season sack record with 15.5 in 2015.

Nassib’s older brother, Ryan, was a quarterback for Syracuse. He was drafted by the New York Giants in the 2013 NFL Draft. He also played for the New Orleans Saints and Jacksonville Jaguars as well.

The 6-foot-7, 275-pound Nassib played in 14 games for the Browns during his rookie season and eventually became a full-time starter the following year.

Prior to the start of the 2018 NFL season, Nassib was released by the Browns and was claimed off waivers by the Tampa Bay Buccaneers one day later. During his first year with the Bucs, he piled up a career-high 6.5 sacks with 12 tackles for a loss. In two seasons with Tampa Bay, he started 17 games and had 12.5 sacks.

In March of 2020, Nassib signed a three-year deal, worth $25 million with the Las Vegas Raiders. In 14 games played, he had 2.5 sacks, 27 total tackles, and hauled in his first career interception, which came against Denver Broncos quarterback Drew Lock in a 37-12 victory over their AFC West rivals.

AFTER CARL NASSIB COMES OUT, THIS HALL OF FAMER SAYS HE PLAYED WITH GAY TEAMMATES

Fast-forward to Monday, Nassib became the first active NFL player to publicly come out as gay.

Nassib posted a video to his Instagram account saying, "I’ve been meaning to do this for a while now but finally feel comfortable getting it off my chest. I really have the best life, the best family, friends and job a guy can ask for."

Nassib also said that he is donating $100,000 to The Trevor Project, which is the "world’s largest suicide prevention and crisis intervention organization for LGBTQ+ youth." On Tuesday, the NFL announced that it would match Nassib’s donation to the organization.

Nassib has received an incredible amount of support from players and coaches across the league since announcing that he was gay, and fans are showing their love and admiration for him as well.

ESPN reported on Tuesday that Nassib’s Raiders jersey is the No. 1 seller on the website Fanatics over the last 24 hours. So many No. 94 jerseys have sold, that the website only has 5XL jerseys available as of Tuesday night.