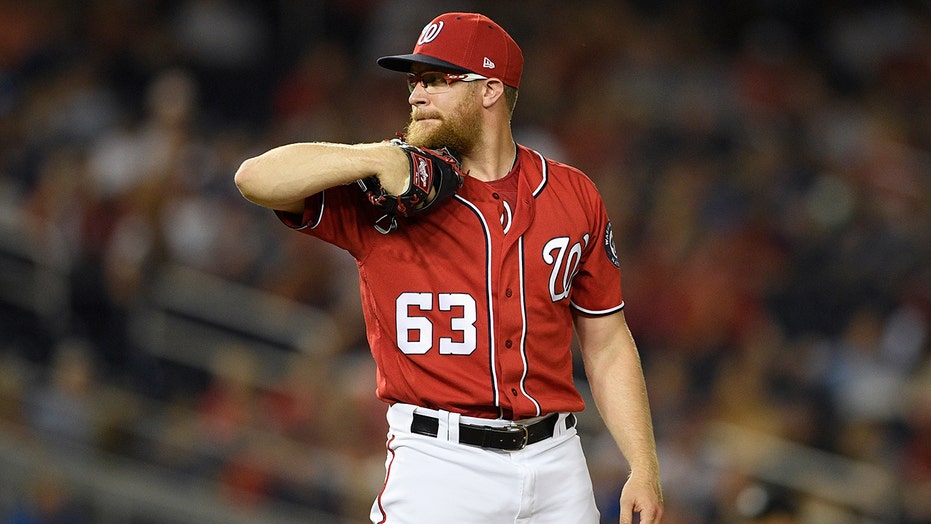 Washington Nationals reliever Sean Doolittle moves a glove out of the way as he reaches into a shelf in his spring training locker and grabs a different one, which he then hands over with a simple, if unusual, instruction:

So, of course, you do -- getting a sweet, soothing whiff of lavender, the sort you might get from a candle or bowl of potpourri. And now you know what Doolittle sniffed each time he jutted his right elbow toward home plate and tucked his glove under his chin to get his catcher's signs during last season's World Series.

At the suggestion of Washington's director of mental conditioning, Mark Campbell, Doolittle put lavender oil on the leather laces around the webbing of his glove for the postseason. It helped the lefty relax on the mound after a rocky regular season, much the way the bullpen as a whole morphed from disaster to asset in 2019, a trend of improvement the club figures will continue in 2020.

"I was so nervous during the playoffs. I was just a big ball of stress. Lavender has a lot of calming and soothing to it," Doolittle explained last week. "When I came set, I could smell it. It worked, man."

In October, he produced two saves and three holds, a 1.74 ERA and a .167 opponents' batting average as the Nationals went 8-1 in his appearances along the way to a championship.

"When you're a reliever and pitching in high-leverage situations in must-win games, and you're on-call every night for like a month, it starts to take its toll on you. And it's a challenge to stay even-keeled and to really manage that energy. That's the hardest part," Doolittle said. “(Campbell) helped me out a lot. My regular season did not go the way I wanted it to go, but I was very proud of the way I was able to get myself together and be really effective in the playoffs."

The same could be said about Washington's entire relief corps.

He was part of unit that had an ERA above 5.50, but got help at the trade deadline. Acquiring Daniel Hudson from Toronto, in particular, was key, even if additions Roenis Elías and Hunter Strickland dealt with injuries.

"On paper," pitching coach Paul Menhart said, "we are a lot stronger."

Both can take on some of the late-inning responsibilities that Doolittle bore so often, getting worn out before heading to the injured list in August with a knee issue.

Elías (14 saves for Seattle in 2019) and Strickland (14 saves for San Francisco in 2018) have closer experience. Tanner Rainey can throw 100 mph and owns a tough slider.

So Rizzo should be able to forgo his usual in-season 'pen padding.

"Definitely is a good feeling knowing that we started spring training with a bunch of guys that have competed in the back end of the bullpen," manager Dave Martinez said. "If one of the guys needs a day off -- or two -- you have another guy that can cover. To have those guys here, whew, it was definitely on our list of 'to-dos.' I'm going to like looking down at that sheet of paper, going, 'Oh we've got Harris. We've got Hudson. We've got a healthy Strickland. And 'Doo' to close it out."

Like Doolittle's special, scented postseason glove, several teammates have some sort of 2019 memento they've held onto.

In a closet at home, Hudson keeps the glove he chucked after recording the last out against the Astros in Game 7 -- the initials of his wife and two oldest daughters are stitched on there; he used a marker to write the initials of his third daughter, who was born during the NL Championship Series against the Cardinals. Yellow-tinted sunglasses worn in the dugout for good luck sit in starter Aníbal Sánchez's locker. Outfielder Michael A. Taylor stored for safekeeping the baseball he dove to catch, with Doolittle on the mound, to end the NL Division Series against the Dodgers (Taylor says a teammate unsuccessfully tried to take that ball during the on-field scrum, but wouldn't reveal who).

When Doolittle heads out for the ninth inning this year, he'll have to do so with a new piece of leather: He switched glove companies in the offseason.

"I now associate that smell with having success in high-leverage situations. And managing myself. There's really positive energy associated with that: We won the World Series. I got to contribute. And I pitched pretty well," he said. “So there's definitely a connection there for me. It's definitely been ingrained, so we'll probably stick with it.”