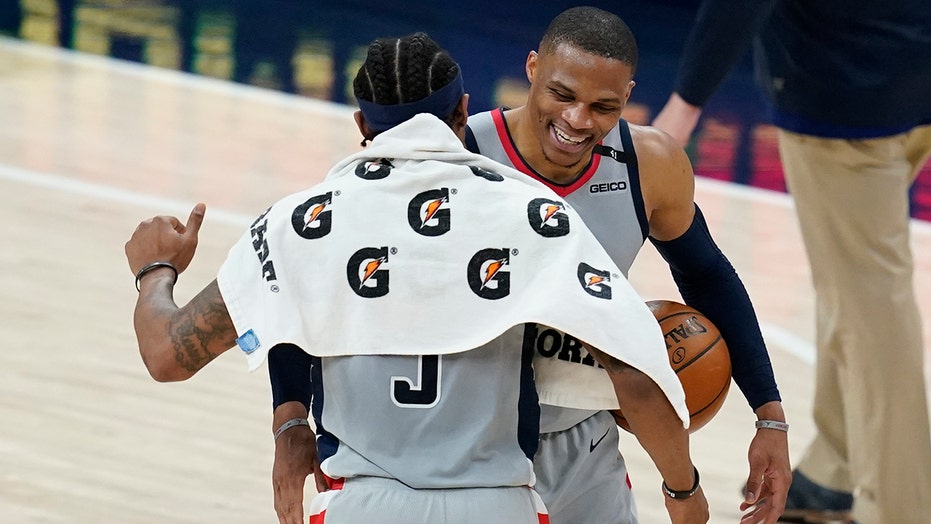 When the final buzzer sounded Saturday night, Russell Westbrook grabbed the ball, jogged to the baseline and waved to the crowd. A few moments after joining Oscar Robertson as the NBA's career triple-doubles leader with 181, he celebrated the milestone with his teammates and his opponents.

It was quite a show.

Westbrook finished with 33 points, 19 rebounds and 15 assists, and made two free throws with a second left to give Washington a 133-132 overtime victory over Indiana. Heck, he even blocked the Pacers' final shot before grabbing the ball.

"I love his spirit, his determination," coach Scott Brooks said. "He's really, really helped us become a better team and that’s vintage, you know — rebound, making a clutch shot, blocking a shot. Those are all great things and those are all team things. That's what Russell's about, he's always been that way."

Westbrook's performance overshadowed everything else on the court.

Bradley Beal scored 50 points to help the Wizards move into the No. 9 spot in the Eastern Conference, a half-game ahead of Indiana but sat out the overtime period after hurting his hamstring and ankle.

But even in a game with a physical, playoff atmosphere all eyes were on Westbrook and the record that stood for nearly a half-century. Westbrook now has a league-high 35 triple-doubles this season, 19 in his last 24 games.

"Every time I step on the floor, I try to leave everything on the floor," Westbrook said. "And when I’m all done, I can look back and no one can say I didn’t compete at the highest level or that I cheated the game."

While the Pacers made a better effort against the Wizards than they did Monday, when they yielded a franchise-record 154 points in a non-overtime game, the game followed a familiar script. Indiana led most of the second half, only to lose the lead in the waning minutes of regulation and again in overtime.

Westbrook and Beal were the biggest reasons.

"They’re good and we're good," Indiana coach Nate Bjorkgren said. "West and Beal are hard to handle and they’ve got very, very good players all around them. But I liked the way we played. We played basketball the right way."

Washington went on a 9-2 spurt to take a 120-119 lead on Beal's layup with 1:28 left in regulation. LeVert's ensuing 3-pointer gave Indiana the lead and after Daniel Gafford tied it at 122 with two free throws with 48 seconds left, Westbrook's layup with 21.4 seconds left gave Washington the lead.

LeVert tied it again with a layup with 13.4 seconds to go and Westbrook's 18-footer at the buzzer came up short.

Wizards: Westbrook extended his streak of double-doubles to 32 games. ... Beal has scored at least 25 points in 71 of his last 82 games and has eight games this season with 40 or more points. ... Alex Len had 10 rebounds and eight points. ... Washington snapped a three-game losing streak in Indy and swept the Pacers for the first time since 2006-07. ... The Wizards have won 15 of their last 19 games. ... Washington scored 419 points against Indiana this season.

Pacers: Edmond Sumner and Doug McDermott each scored 13 points. ... Sabonis also had three steals and recorded his eighth triple-double this season. ... LeVert's rebounding total was a career best and came two days after he posted his first double-double of the season with Indiana. ... The Pacers are 12-21 at home this season. ... Indiana is 5-2 in overtime this season and is 8-10 in games decided by five or fewer points.

Brooks was uncertain how serious Beal's injury is, and that it might not be known for a couple of days. But he held him out in overtime as a precaution. "He tweaked his hamstring," Brooks said. "Actually, he tweaked his ankle and we didn’t want to push it at the end. He wanted to but our guys told him not to push it. Hopefully, it's not too serious."

Wizards: Make the fourth stop on a five-game road trip Monday at Atlanta.

Pacers: Begin the final week of the regular season at Cleveland on Monday.