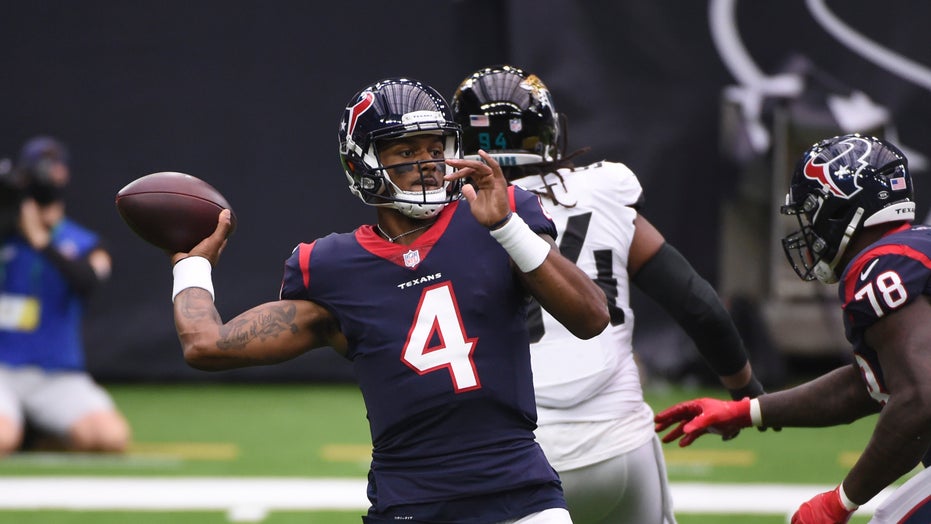 Romeo Crennel wouldn't take credit for the Houston Texans getting their first win on Sunday after he took over as interim coach this week in the wake of Bill O'Brien's firing.

“Because we won the game everybody wants to say: ‘What did I do'? Well, the players are the ones who did it," Crennel said.

Deshaun Watson threw for a season-high 359 yards and three touchdowns in a 30-14 victory over the Jacksonville Jaguars.

O’Brien, who was also the general manager, was let go on Monday after the Texans fell to 0-4 last weekend. At 73 Crennel became the oldest coach in NFL history, passing Hall of Famer George Halas, who was 72 in his last game with the Bears in 1967.

“I told them that they were better than their record showed going into the game and I think they believed that,” Crennel said. “And then they won the game so they might believe everything I tell them.”

The Texans led 23-14 after a field goal with about 7½ minutes to go and got the ball back when Jacob Martin sacked Gardner Minshew and forced a fumble. It was recovered by Whitney Mercilus, who fumbled on the return, but the Texans pounced on the ball to keep it.

Houston (1-4) pushed the lead to 30-14 when Watson found Brandin Cooks on a 28-yard touchdown pass on fourth-and-4 with about five minutes remaining.

Defensive end J.J. Watt raved about the attitude of the team on Sunday.

“Everybody doing their jobs," he said. “The energy was great. It was fun. We had fun and that’s how it is supposed to be."

The Jaguars (1-4), who were missing three defensive starters because of injuries, have dropped four in a row since their season-opening win against Indianapolis. Their past three losses have come against teams that were previously winless. The Jaguars are the first team in NFL history to lose three straight games to winless teams, not including season openers.

“We couldn’t ask much more of what the defense did today. They gave us opportunities with short fields and we wasted it," Minshew said. “We have to do better in that sense. There’s no pointing fingers anywhere else but ourselves.”

Minshew threw for 301 yards and two touchdowns in the loss.

The Texans were able to overcome two interceptions by Watson by taking advantage of two fumbles by the Jaguars. Those were the first turnovers forced by the Texans all season.

“We were planning on coming in here and thinking that we were going to have to score points with the injuries that we had on defense," Jaguars coach Doug Marrone said. “That’s the plan that we tried to put together and obviously it didn’t work well."

Houston also played much better against the run in the first game under Crennel, a former defensive coordinator. They entered the game allowing an NFL-worst 181.8 yards a game, but limited the Jaguars to 75 on Sunday.

Cooks had a season-high 161 yards receiving and David Johnson also had his best game of the year with 96 yards rushing.

The Texans pushed their three-point halftime lead to 13-7 with a field goal early in the third quarter and were driving again later in the third when Sidney Jones intercepted Watson for the second time. He returned it 48 yards and would have likely scored if Watson didn't tackle him.

Jacksonville was unable to take advantage of the mistake, as rookie running back James Robinson fumbled after taking a direct snap on fourth down from the Houston 10 and it was recovered by Watt.

Watson then led a 90-yard drive capped by a 19-yard TD throw to Will Fuller to extend the lead to 20-7 early in the fourth.

Minshew threw a 4-yard pass to rookie Collin Johnson on fourth-and-4 for a score to cut the lead to 20-14 with about 10 minutes remaining. Chris Conley had a 51-yard reception earlier in the drive to get the Jaguars in scoring position.

Houston led 3-0 early in the second quarter when Minshew threw a 13-yard touchdown pass to Keelan Cole to put the Jaguars on top.

Darren Fells got in front of the defense and was wide open for a 44-yard catch-and-run that made it 10-7 later in the second.

The Jaguars had a chance to tie the game before halftime, but Stephen Hauschka missed two field goals in the last 37 seconds of the second quarter. He missed from 24 yards first when his kick sailed wide left.

Jones intercepted Watson on the next play and Hauschka got another chance on the last play of the quarter. But his try from 49 yards was short to leave Houston up 10-7.

Hauschka, who was signed last week, is the fourth kicker the Jaguars have used in a game this season.

The Texans spent a good chunk of their postgame interviews talking about the postgame celebration, which was highlighted by a series of dances from their septuagenarian coach that included the “Macarena.”

“Hopefully we can have him dancing all year long," Watt said.

For the second week in a row a player has been ejected for targeting after a hit on a Texans player. On Sunday, Jaguars safety Josh Jones was disqualified for his hit on Cooks after he made a 23-yard catch early in the third quarter. The penalty comes a week after Minnesota’s Harrison Smith was ejected for his helmet-to-helmet hit on tight end Jordan Akins. Akins sustained a concussion from the hit by Smith. Cooks was not injured.

Jaguars: Host the Lions next Sunday.

Texans: Visit the Titans on Sunday.