Warriors bounce back from blowout with victory at Clippers 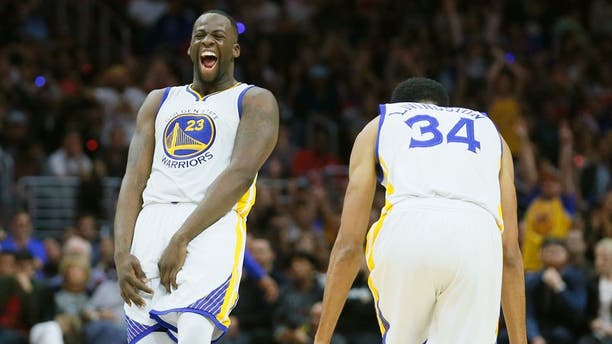 The Warriors were coming off a 32-point drubbing at Portland a night earlier that snapped their 11-game winning streak. They appeared highly motivated to erase that memory from the opening tip, shooting 56 percent in the first half and twice leading by 15 points in the second quarter.

Draymond Green had his NBA-leading 11th triple-double with 18 points, 11 rebounds and 10 assists to help the defending champions improve to 49-5.

Jamal Crawford scored 25 points off the bench, Chris Paul added 24 and DeAndre Jordan had 16 points and 21 rebounds for the Clippers. They fell to 19-6 without injured Blake Griffin. Their two earlier losses to the Warriors were by a combined 11 points with Griffin in the lineup.

The Clippers were coming off a 19-point win over San Antonio on Thursday night. Even with a day of rest, they played behind nearly the entire game.

Pablo Prigioni's 3-pointer left the Clippers trailing 115-112 with five seconds to go, long after both teams' best players had gone to the bench. That brought Thompson, Curry, Green Harrison Barnes back in a hurry.

Andre Iguodala's pass was stolen by C.J. Wilcox, but his panicked shot fell well short of the basket as time expired.

The Clippers again trailed by 15 early in the third when they briefly matched the Warriors basket-for-basket during a furious scoring stretch to close within five on a dunk by Jordan off Crawford's alley-oop pass. Jordan threw down some highlight dunks that had fans roaring and Crawford scored on a one-handed scoop shot, getting fouled as he crashed to the floor and making the free throw for the three-point play.

The Warriors' shooting percentage dipped -- barely -- to 50 percent in the third when Curry missed a few shots and got called for traveling. The Clippers' defense couldn't stifle them, either from the perimeter or inside. Curry hit a 3-pointer with Paul in his face, and Green caught an inbounds pass from Iguodala in traffic at the basket and scored.

Curry was fouled on a 3-pointer and made two of three before Green's layup kept the Warriors ahead 93-84 going into the fourth.

Golden State went up 14 points early in the fourth on consecutive baskets by Barnes and later stretched it to 18 points on a 7-0 run that included Barnes' second 3 of the quarter.

Warriors: Green had a technical in the first quarter. ... The Warriors improved to 25-5 on the road. ... C Andrew Bogot sat out with a strained right Achilles. ... F James Michael McAdoo missed his 22nd straight game because of a sprained toe on his left foot. ... After Curry got fouled on a 3-pointer and missed one of his free throws, a fan shouted, "Why don't you make everything?"

Clippers: J.J. Redick, who finished with 16 points, and Paul each got technicals 67 seconds apart in the second quarter. ... The Clippers signed F-C Alex Stepheson to a 10-day contract. The 28-year-old former USC player was averaging 15.9 points, 13.8 rebounds and 1.3 blocks in 31 games for the Iowa Energy of the NBA's D-League this season. Stepheson, who is 6-foot-10, has played overseas since failing to be drafted in 2011. "He has the gift of a being a big that plays with energy," coach Doc Rivers said. ... Rapper Kendrick Lamar was on hand in the same arena where he won five Grammys last Monday. Beyonce and Jay Z, Floyd Mayweather, comic Adam Sandler, Northern Trust Open third-round leader Bubba Watson, "Grease" actress Keke Palmer and former Clipper Baron Davis also attended.

Warriors: They continue a seven-game trip at Atlanta on Monday night.