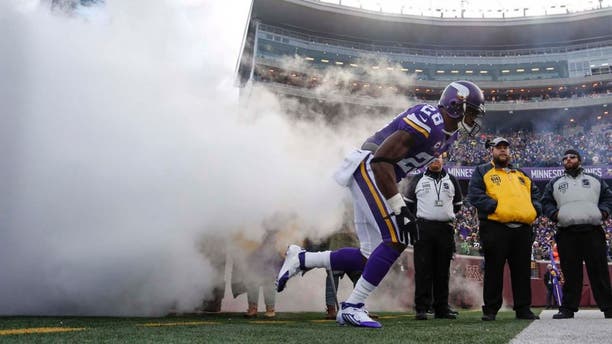 Sunday, Nov. 22: Minnesota Vikings running back Adrian Peterson comes onto the field out of a cloud of smoke to play the Green Bay Packers at TCF Bank Stadium in Minneapolis.

WAHIAWA, Hawaii -- Seattle Seahawks quarterback Russell Wilson was selected with the first pick in the Pro Bowl Draft on Wednesday.

Wilson was chosen by Michael Irvin, who is serving as a Pro Bowl legend captain opposite fellow Hall of Famer Jerry Rice for Sunday's game.

Rice selected Dolphins wide receiver Jarvis Landry with his third pick and went with the Raiders' duo of quarterback Derek Carr and wide receiver Amari Cooper with his next two selections before taking the first running back, Minnesota Vikings star Adrian Peterson, with his seventh-round pick.

Thirty-four players -- mostly linemen and special teams players -- were pre-drafted on Tuesday for the NFL's all-star game. Forty-eight players will be drafted or assigned Wednesday.

Manning will be reunited with Beckham, his teammate in New York.

"Hopefully we can be on the same page and hook up and get a couple touchdowns. But I'm just happy to be here in Hawaii and with some of the other players around the NFL," Manning said. "It's a great week and I'm just honored to be here."

The draft was held in an airplane hangar at Wheeler Army Airfield, located in the town of Wahiawa in the central plain of Oahu, the most populated of the Hawaiian Islands.

Only ticketed military members were allowed to attend the draft.

The Pro Bowl will be played Sunday at Aloha Stadium.