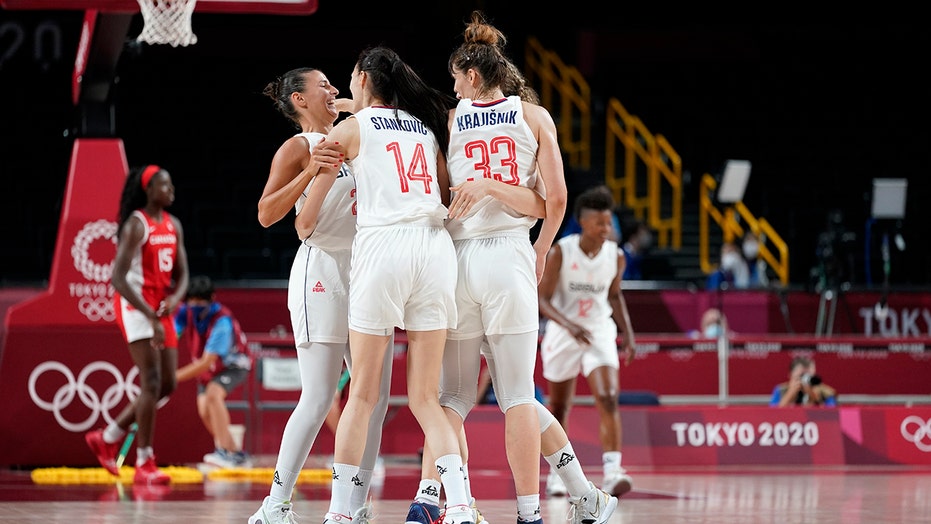 Sonja Vasic scored 16 points and Ana Dabovic keyed a late run to help Serbia beat Canada 72-68 on Monday in the Olympic opener for both teams.

With the game tied at 58, Serbia scored nine of the next 11 points to take control, Dabovic was involved on all of them, hitting two 3-pointers and also having a nifty backwards pass over her head as she was driving the lane to a wide-open Aleksandra Crvendakic in the corner, who made another 3.

But Canada wasn't done. Nirra Fields hit two 3-pointers over the next 2 minutes to get Canada within 68-66 with 51 seconds left.

The Canadians trailed 70-67 with 10.3 seconds left when Shaina Pellington made the first of two free throws. After missing the second, Dabovic hit a layup to seal the game.

"A team like this we knew they weren’t going to back down," said Serbia's Yvonne Anderson. "But if you give yourself any type of breathing room, then we kind of have to trust our defense to finish off the game. In this game, ... It was ugly, but you have to find a way to win."

"It’s a long tournament," said Kia Nurse, who added 16 points for Canada. "We beat them the first game the last time (at the Rio Games) and they went on to win a bronze medal."

Both teams got off to hot starts with Canada leading 11-10 with 5:47 left in the first quarter after Fields' layup off a steal. That would be the last basket for Canada for just over 10 minutes. The Canadians missed their last nine shots of the quarter and then the first five of the second period as Serbia built a 25-15 advantage.

Serbia led 36-28 at the half. Canada had a 10-0 run as part of a huge third quarter to tie the game at 45. The Canadians did lose guard Shay Colley to an injury in the quarter. She sat on the bench for the fourth quarter with her right shoulder wrapped.

These teams are back on the court Thursday with Canada playing South Korea and Serbia facing Spain. The Spaniards won their opener beating the Koreans 73-69.

Canada forward Natalie Achonwa has recovered from a sprained MCL in her right knee that she injured on June 12 while playing with her WNBA team the Minnesota Lynx. She started for Canada and played 21 minutes but was scoreless. ... Both Miranda Ayim of Canada and Vasic of Serbia carried their country's flags in the opening ceremonies. ... Anderson is the daughter of St. John's men's coach Mike Anderson. She played college basketball at Texas and obtained Serbian citizenship.