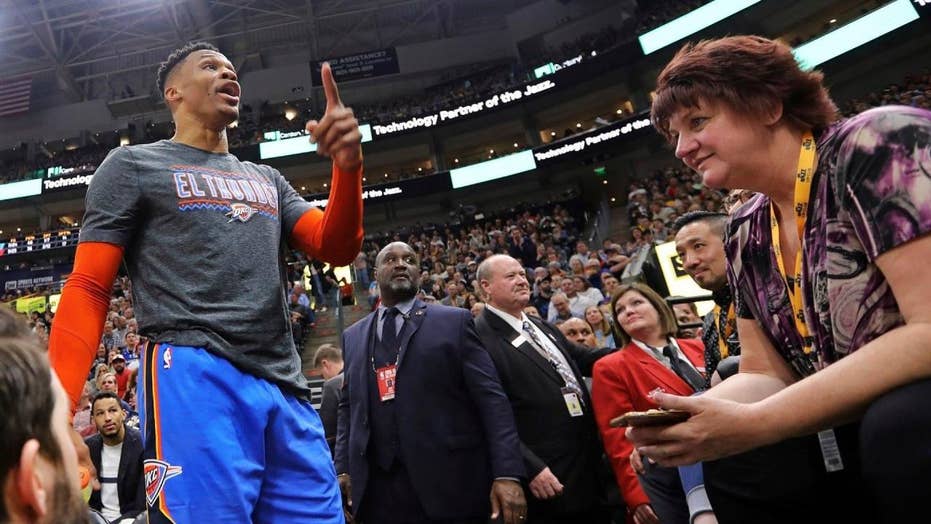 The Utah Jazz fan who had a verbal altercation with Oklahoma City Thunder star Russell Westbrook has been permanently banned by the Jazz, the NBA team said in a statement Tuesday.

"The Utah Jazz and Larry H. Miller Group announced today a permanent ban of the fan who engaged in the inappropriate interaction with the Oklahoma City Thunder's Russell Westbrook last night at Vivint Smart Home Arena," the statement said, adding that verbal abuse violated the NBA Code of Conduct.

Westbrook responded to the fan and his wife with a profanity-laced threat, but told reporters after the game Monday that the couple's comments were racial.

The fan, identified in reports as Shane Keisel, told Salt Lake City's KSL-TV that he told Westbrook, "Sit down and ice your knees, bro.”

But Westbrook said he heard "Get down on your knees like you used to.”

"For me, that's just completely disrespectful. I think it's racial," the former MVP said.

Keisel told the station that those claims are false and that he is not a racist. He said he is filing a lawsuit against Westbrook and has been advised to shut down his social media accounts, the station reported.

“Everyone deserves the opportunity to enjoy and play the game in a safe, positive and inclusive environment. Offensive and abusive behavior does not reflect the values of the Miller family, our organization and the community. We all have a responsibility to respect the game of basketball and, more importantly, each other as human beings. This has always been a hallmark of our incredible fan base and should forever be our standard moving forward,” he said.

Jazz guard Donovan Mitchell also issued a statement saying that he "was personally hurt by the incident," tweeting "We have to do better... we will do better!"

“Racism and hate speech hurts us all, and this is not the first time something like this has happened in our arena," he said. "Over the coming months I will work with the team, my teammates and the league to help make our arenas and our communities more inclusive and welcoming. That includes bans on hate speech and racism."

The NBA also fined Westbrook $25,000 on Tuesday afternoon for "directing profanity and threatening language to a fan," according to an NBA press release.

Amy Lieu is a news editor and reporter for Fox News.
ADVERTISEMENT