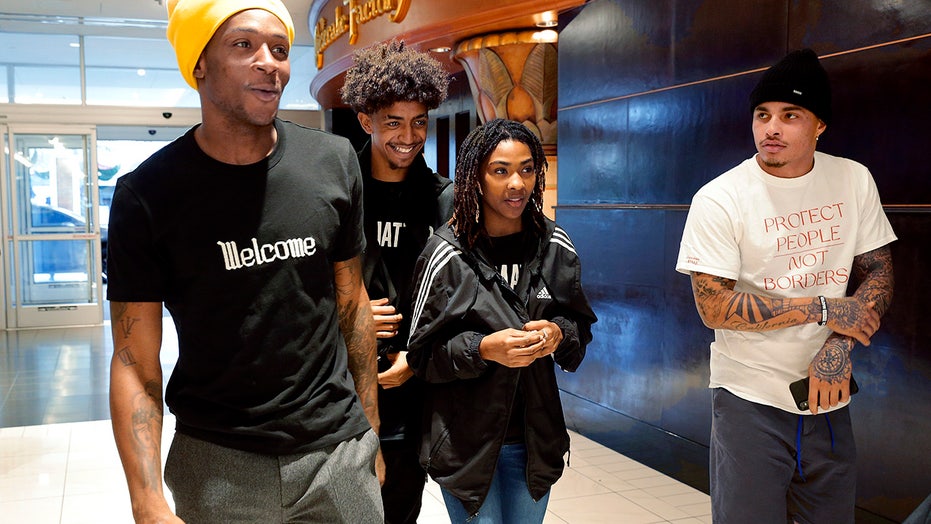 Miracle Washington-Tribble didn't see much hope for her future.

At 16 and already a single mother to a baby boy, she wasn't going to school, had been in numerous fights and lacked ambition to turn her life around.

Then in August she was introduced to Eight Million Stories, a Houston program which helps 14 to 18-year-olds who have either quit or been kicked out of school continue their education, find employment and receive emotional support.

"At first I never saw myself getting a job or even finishing school," Washington-Tribble said. “I never went to school and I was doing bad stuff. But when I got here they motivated me to keep coming to school. I didn't see me having a future. But they help you with your dreams and goals. It motivated me and I see a future now.”

Miracle Washington-Tribble, left, and Houston Texans' De'Andre Hopkins, right, chat on an escalator as they shop for Christmas clothes Monday, Dec. 16, 2019, at Galleria Mall in Houston. Washington-Tribble and Jadon Cofield are beneficiaries of Eight Million Stories, a Houston program which helps 14-18-year-olds who have either quit or been kicked out of school continue their education, find employment and receive emotional support. (AP Photo/Michael Wyke)

In four short months, Washington-Tribble barely resembles that person. She has a job and is on track to receive her GED at the end of January. But most importantly, the petite teenager with the radiant smile now has hope for a better life.

"Miracle has turned her entire life around just being involved in this program," said Marvin Pierre, the program's co-founder and executive director. "Eight Million Stories filled a big gap in her life, which was love and finding a support system that she could tap into. And to see where she was in August and to see where she is now in terms of what she believes is possible for her future is just really a testament to the amazing staff that we have."

The students knew about the shopping spree when they arrived at the Houston Galleria last week, but the teenagers had no idea that Hopkins and Stills would be joining them for a day of fun. When the two walked in, the teenagers beamed and gasped with excitement before sharing handshakes and hugs with the players.

Miracle Washington-Tribble, left, and Houston Texans' De'Andre Hopkins, right, chat on an escalator as they shop for Christmas clothes Monday, Dec. 16, 2019, at Galleria Mall in Houston. Washington-Tribble and Jadon Cofield are beneficiaries of Eight Million Stories, a Houston program which helps 14-18-year-olds who have either quit or been kicked out of school continue their education, find employment and receive emotional support. (AP Photo/Michael Wyke)

Both Hopkins and Stills have been working with Eight Million Stories and raved about the importance of the program.

"You can actually see the difference that they're making in kids," Hopkins said. "It gives kids a second chance. A lot of times when kids get in trouble they might get labeled or judged for mistakes that they made at a young age. This program right here gives kids an opportunity to better themselves after messing up or doing something that kids might do."

Cofield has been involved with the program since May and has gotten back on track after struggling with negative influences and not succeeding in traditional schools. He is also scheduled to receive his GED at the end of January, and his involvement in the program has helped nurture his love of music. Cofield recently penned a song about Hopkins and was thrilled when Hopkins FaceTimed him at Eight Million Stories so he could perform the song for his favorite receiver.

"Whatever you want to push forward they help you build that and do that because they know that's important to you," Cofield said. "Like me with my music, they've been helping me with putting effort toward music and gave me an opportunity to make a song for DeAndre Hopkins ... and when I did it for him it just felt amazing."

Eight Million Stories, a local organization that opened in 2017, is working to grow and help more students, one of the reasons Stills wants to help.

"It's really important to me to work with organizations that are grassroots, that are not really getting much funding, that aren't really getting much attention, and trying to use the platform that we have to really uplift the work that they're doing and work together," he said. "Sometimes, especially organizations like this when they're just starting out, it's like you could possibly feel like no one notices the work that you're doing or you feel like you're not really making an impact, and they are."

Stills knows how vital it is for teenagers to see strong role models and is invested in helping young people avoid pitfalls that could derail their success.

"I was running around, I was a teenager causing trouble like everyone else, and there could have been plenty of times where I could have found myself in jail for things that I was doing," he said. "So I was lucky enough to make it by, and it's important for me to come back and talk to young people and try and mentor being that I come from a similar background and I could have been in the same position as them."

On the day of the shopping trip, Hopkins and Stills spent almost two hours with the students, putting together outfits and collaborating to see what looked best.

There were times when Hopkins, who has been featured in GQ magazine as one of the league's most fashionable stars, would grab a dress or shirt, only to have Washington-Tribble shake her head and explain why that look wouldn't work. But other times he'd suggest something a bit more edgy than her selections and she'd grab the outfit and agree to give it a try.

After filling two racks with clothing ranging from casual to dressy, the group took over an entire dressing room at H&M. Hopkins then cranked up some rap music on his phone to give their time trying on clothes the festive feel of a fashion show.

Cofield pulled back the green curtain and sheepishly emerged from a dressing room wearing slim black pants and a grey plaid jacket — to cheers of approval from Hopkins and Stills. Hopkins then approached Cofield and told him he needed to button each button of the jacket he wore to get the proper silhouette.

It was then that Washington-Tribble came out of her stall wearing a black overall dress with a cropped pink top underneath. She walked out of the room and strutted through the hall before stopping to strike a pose as everyone raved about her look.

Hopkins loved seeing the happiness on the faces of the teenagers as they modeled their new threads, and said there was nothing he'd rather be doing on his day off.

"Your clothes make you feel good," he said. "There's something about putting on a new pair of shoes or a new shirt that gives you a new joy. It's like on the first day of school that's the happiest you're going to be because you're wearing a new outfit. So I think your clothes and the way you present yourself definitely helps your morale."

After the teenagers loaded up on clothes, the group walked across the mall to a shoe store where they could complete their looks. During the walk the players chatted with the students about everything from school and parenthood to football and fashion.

"It was great just to have that experience," Cofield said. "Just chilling with a big-time NFL star and knowing it came from him. The love was real, the atmosphere was cool. Everything was great all around."

As the group, now loaded with bags and bags overflowing with goodies, approached the exit to the mall and the students thanked the players for the day, it wasn't goodbye but rather see you later. One more exciting treat awaited.

While the students got practical things such as nonslip shoes for work and jeans for everyday wear, the players made sure they both came away with one special outfit.

And on Sunday afternoon the group will meet again. The students will wear those expertly picked ensembles and the players will be in what they promised to be: coordinating gear. Then the students will enter NRG Stadium with Hopkins and Stills, walking through the tunnel and being photographed to show off the clothes they worked so hard to earn.

"It's just going to be so amazing," Washington-Tribble said. “I never thought that I would be with an NFL player walking through the tunnel.”

Added Cofield: "I can't wait for the opportunity. I need Sunday to come now."

Hopkins is also eager for Sunday to come, but does have one concern.

"I know they're going to look cool because I helped them pick out some of their clothes. But they might look better than me coming into this last game," he said with a laugh.