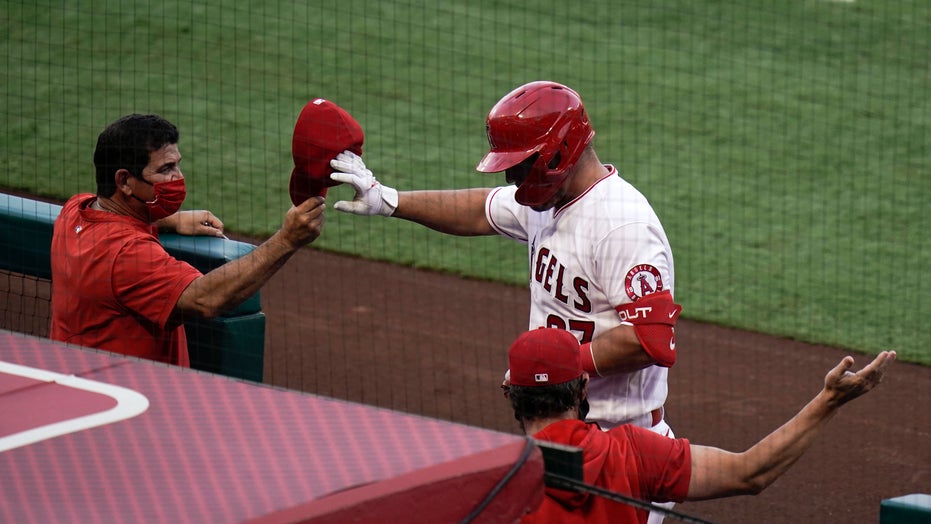 Mike Trout tied the Angels’ record for career home runs in the first inning and scored the winning run in the 11th as Los Angeles beat the Houston Astros 6-5 on Friday night.

Trout drove a sinker from Lance McCullers Jr. over the wall in center for a two-run shot in the first inning for No. 299 of his 10-year career, matching Tim Salmon for the franchise mark.

The homer was a special moment for Angels manager Joe Maddon, who has coached both Trout and Salmon. Maddon was also one of Salmon's signing scouts.

“I think it's great. I'm happy to be affiliated with both guys," he said. “I know no one would be more happy for Michael than Timothy.”

The reigning AL MVP began the bottom of the 11th as the automatic runner at second base and scored on Shohei Ohtani's one-out single to right off Brooks Raley (0-1).

Ohtani has had a frustrating season, batting only .190 and having his return to pitching dashed by continued elbow problems. The two-way Japanese star hopes his first walkoff hit in the majors can help him over the final three weeks of the season.

“Obviously I'm satisfied with the results but I'm more satisfied with how I felt in my last two plate appearances," he said through an interpreter. "If I can continue that, things will trend upward.”

Ohtani thinks this was his first walkoff hit since Game 3 of the 2016 Japan Series with the Hokkaido Nippon-Ham Fighters. He said he has adjusted his stance to give him a better view of the pitcher and the entire field.

Houston trailed 5-2 going into the ninth before rallying to tie. Martin Maldonado led off with a single and moved to third on George Springer’s double off Ty Buttrey before scoring on a passed ball. Springer brought the Astros within a run when he scored on Josh Reddick’s grounder to first.

Michael Brantley lined a single to center before being lifted for a pinch-runner. Myles Straw stole second with two outs and tied it on Kyle Tucker’s double off Matt Andriese.

Astros manager Dusty Baker bemoaned the missed opportunities. They were 3 for 24 with runners in scoring position and left 12 on base.

“We did fight back in the ninth, but a lot of times you lose the game before the ninth. It was very frustrating tonight to see opportunities squandered,” he said.

Andriese (2-2) bounced back and retired seven straight to get the win as LA improved to 2-5 in extra-inning games.

“I can not give him enough praise,” Maddon said about Andriese. “He made just the one mistake pitch but did not cave.”

Dylan Bundy allowed only two runs in seven innings for the Angels. His only trouble came in the fourth when Houston plated a pair to get within 4-2. Brantley scored on Tucker’s grounder to first, and Carlos Correa’s double drove in Yuli Gurriel.

The Angels extended their lead to 5-2 in the sixth on Andrelton Simmons’ RBI single.

Bundy lowered his ERA to 2.49, which is third in the AL. The right-hander struck out eight and allowed only six hits with one walk.

McCullers made it through only five batters for the shortest start of his career. Simmons led off with an infield single, Trout homered and McCullers loaded the bases with three straight walks.

Baker said McCullers was not hurt, but that he hasn't pitched this many innings in a season since having Tommy John surgery on his right elbow in 2018.

“He didn’t want to come out of the game," Baker said. "Nobody likes an early exit. Nobody, but I told him I’m doing this for him and for us.”

Luis Garcia came on for his big-league debut and allowed only one of the inherited runners to score when Jared Walsh's sacrifice fly drove in Anthony Rendon.

The 23-year-old Venezuelan — who had not pitched above Class A prior to Friday — allowed one hit in 4 1/3 innings, Walsh's third-inning solo shot to center to extend Los Angeles' lead to 3-0. The right-hander struck out two and walked three.

Astros: 2B José Altuve did not play after he sprained his right knee while sliding into third base during Thursday's game against Texas. Manager Dusty Baker said Altuve is doubtful to play this weekend. ... P Chris Devenski came off the injured list after five weeks. The right-hander has not pitched since July 26 and had been dealing with right elbow soreness.

Angels: C José Briceño was drilled in the left hand by Springer's swing on a foul ball but remained in the game. Briceño was called for catcher's interference.

The teams play a seven-inning doubleheader Saturday to make up the Aug. 26 game in Houston that was postponed due to Tropical Storm Laura. The Astros will be the “home” team at Angel Stadium in the second game.

Rookie right-hander Brian Bielak (3-2, 5.40 ERA) will start the first game and Jose Urquidy will make his first appearance since Game 4 of last year's World Series in the nightcap. The right-hander missed more than a month after being diagnosed with COVID-19 after arriving in Houston for the start of summer camp. The Angels will counter with right-hander Griffin Canning (0-3, 4.04 ERA) in the first game and will use an opener in Game 2.