Tigers, Orioles in talks with Rockies about outfielders 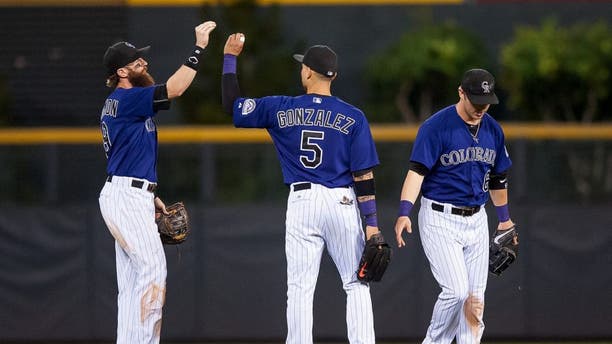 With the reported acquisition of Gerardo Parra on Tuesday, the Colorado Rockies now have a surplus of outfielders, which has garnered the attention of teams with a need for outfielders.

FOX Sports MLB insiders Ken Rosenthal and Jon Morosi were informed by their sources that both the Baltimore Orioles and Detroit Tigers are interested in Colorado's outfielders.

According to Rosenthal, the outfielders in play are Carlos Gonzalez, Charlie Blackmon, and Corey Dickerson, all of whom are left-handed sluggers.

Gonzalez, a perennial All-Star, is the most established out of the trio. The 30-year-old has won three Gold Glove awards and finished third in the NL MVP award voting in 2010.

He is coming off a resurgent season, in which he hit a career-high 40 home runs and drove in 97 runs, his highest RBI total since 2010.

Blackmon and Dickerson both had breakout years in their first full major-league seasons in 2014, hitting a collective 43 home runs with 148 RBI at a .298 clip.

Although the Rockies could potentially keep all four outfielders, the Denver Post reports "it's highly unlikely the Rockies would report to spring training with all four players."

Colorado's interest in parting ways with Gonzalez or one of its homegrown outfielders apparently would be to acquire starting pitching.

The Post reports that the Rockies have shown interest in 25-year-old Orioles right-hander Kevin Gausman, as well as the Orioles' top two overall prospects in right-handers Hunter Harvey and Dylan Bundy.

In addition to the Orioles and Tigers, the Los Angeles Angels of Anaheim are also said to be interested in the Rockies' outfielders.