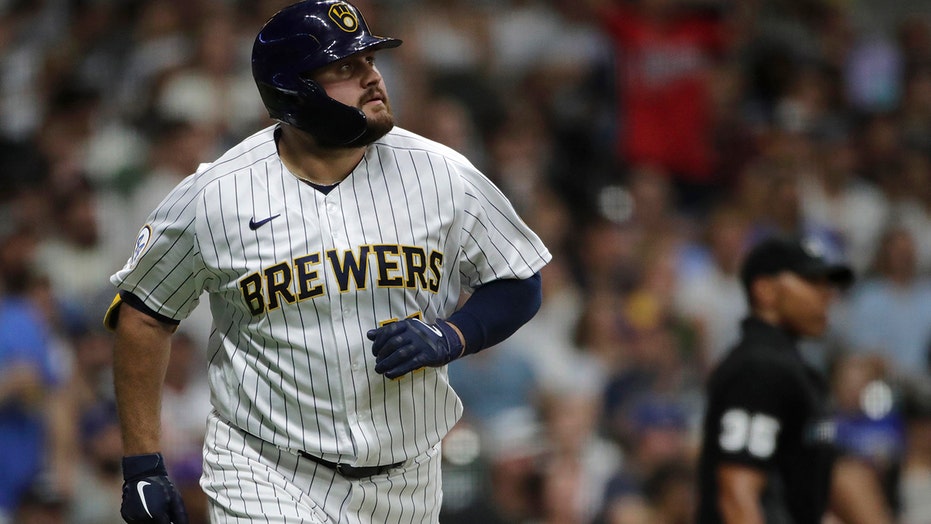 Then the Milwaukee Brewers slugger quickly corrected himself.

"I had one in the minor leagues, I think Double-A I had one," Tellez said after the Brewers' 6-1 victory over the Chicago White Sox. "But everything's better in the big leagues."

Tellez went 3 of 4 with three RBIs and hit his first two homers as a Brewer since getting acquired from the Toronto Blue Jays on July 6. He delivered solo shots off José Ruiz in the sixth inning and Reynaldo López in the eighth.

After going 2 for 13 in his first nine games with his new team, Tellez is 5 of 7 with three runs and five RBIs in this series. He has gone 7 of 13 against the White Sox this season.

"It’s good to see him swing the bat," Brewers pitcher Corbin Burnes said. "That’s a big man with a lot of power. He just touches the baseball and it goes a long way."

Tyrone Taylor and Kolten Wong also went deep for Milwaukee in front of 41,686 spectators, the Brewers' largest crowd of the season. That crowd included a sizeable contingent of White Sox fans.

Wong's homer came on Carlos Rodón’s first pitch of the night. Taylor's shot came one night after he delivered a grand slam in a 7-1 victory over the White Sox.

Burnes (6-4) struck out six and allowed four hits, two walks and one run over six innings to help the Brewers earn the 4,000th victory in franchise history. Their overall record of 4,000-4,289 includes their 1969 inaugural season as the Seattle Pilots.

"We’ve had such outstanding support from our fans that drove from Chicago, but we’re disappointed that we haven’t played better and they’ve seen two losses," White Sox manager Tony La Russa said. "Hopefully we can give them one tomorrow night."

The White Sox trailed 4-0 through the first four innings and wasted a golden opportunity in the fifth. They had the bases loaded with nobody out when Leury García hit a roller up the third-base line to bring home Moncada.

But the run was taken off the board after replays showed Moncada never touched home plate. His right foot hit the dirt inches shy of the plate and then his left foot came down in the batter’s box.

"I really thought I stepped on home plate," Moncada said through an interpreter. "It wasn’t until replay that I realized I hadn’t."

The call led to a discussion between La Russa and the umpiring crew, causing a lengthy delay that included a second replay review to confirm that an appeal could be made following a mound visit. The appeal happened after Brewers pitching coach Chris Hook went to the mound.

"Once Hooky left the mound, (Brewers manager Craig) Counsell yelled from the dugout, ‘Hey, he missed the plate, we’re going to step off and appeal here,' " Burnes said. "I guess they knew all along he missed the plate. There was just so much craziness going on, it took a while for the phone to get answered. We all saw it. He missed the plate, clear as day."

Burnes issued a bases-loaded walk to Zack Collins after play resumed to bring home Chicago’s first run, but he struck out pinch-hitter Jake Burger and retired Tim Anderson on a fly to right to end the inning.

Rodón (8-4) gave up leadoff homers to Wong and Taylor in each of the first two innings. He lasted a season-low four innings and allowed four runs, though only two were earned.

Milwaukee scored twice in a fourth-inning rally that featured a throwing error by Collins and a pair of walks, including one to Willy Adames with the bases loaded.

White Sox catcher Yasmani Grandal offered an update on his recovery from a torn left knee ligament that has kept him from playing since July 5.

"We’re kind of following a schedule where I’m starting to catch," Grandal said before the game. "I’m supposed to be starting to hit. I’m running. Now we’re going to get into stretching and mobility and stuff like that just because my last week and a half, two weeks, I haven’t been able to really stretch it out because they want to let it heal."