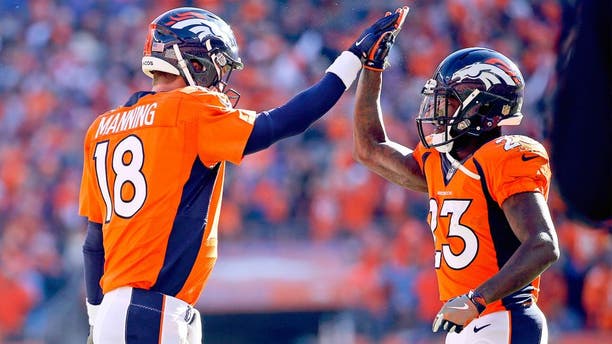 If there was a Hall of Fame just for being a good teammate, Peyton Manning would be a first-ballot inductee there as well.

FOXSports.com asked 10 Denver Broncos players and coaches at Super Bowl 50 for one anecdote about their star quarterback. There were two connecting threads in the answers. One was praise for Manning's sense of humor from pulling subtle pranks to imitations of coaches to helping organize rookie talent shows. The other is Manning's ability to put teammates at ease that may have become star-struck and initially intimidated by being on the same roster as an NFL legend they grew up watching.

Here are some of the best responses:

Broncos cornerback Bradley Roby: "He texted me as soon as I was drafted (in 2014). That was a big thing to me. I didn't expect that. It was like, 'Dang! Peyton just texted me.' I had so many text messages that at first I thought, 'This has got to be fake.' But it was a long text so I read it and it was stuff that a leader of a team would say. It was, 'Welcome to the NFL. We've got a lot of confidence in you. We just lost the Super Bowl so we're going to need you to come in and play.' That's pretty dope to me."

Broncos backup center Sam Brenner: "I watched Peyton since he was in Indy and Jeff Saturday was his center. I was like, 'Man, that's really sick. That's Peyton's center.' And now I'm doing the same thing Jeff Saturday once did.

"Playing with him, you start off with just a few real easy slow basic snaps just to see where the ball is coming. And then as you get more reps, it becomes more comfortable. It's like a guard working with a tackle on the offensive line. The more guys do it, the better you do at it.

"The first couple of weeks in Denver, I would still kind of be like, 'Alright, you're snapping it to Peyton. Don't mess it up.' He was cool about it. He was like, 'Just take it easy. We'll get it.' I think he has a pretty good idea that young guys look up to him."

Broncos defensive end Vance Walker: "When he first signed with the team (in 2012), I remember the first day when I came into workouts back in the OTAs. He was one of the first people to approach me. He didn't know me but he came up and introduced himself. I was kind of nervous like, 'Uhh, this is Peyton.' But nonetheless outside of that, he always asked how I was doing when he never had to. He's definitely a good person. That's something I can totally appreciate about someone like him."

Broncos rookie quarterback Trevor Siemian: "The first time I met him, he came up to me and shook my hand. I was surprised. I thought I was going to be chasing him down in the facility. He was like, 'Trevor, good to see you. Nice to have you on-board. How's Pat?' I said back to him, 'Pat? Who the heck is Pat?' He was talking about coach Fitz (Pat Fitzgerald), my coach at Northwestern. I don't know him as Pat. It was interesting to see the kind of relationship they had."

Broncos wide receiver Cody Latimer: "Outside of football he's a fun guy. When he's in football mode, he's in football mode. He's a business man. He has his business side and he has his fun side. Being able to bond with him at Duke (University) this past offseason was amazing. We'd wake up and watch film of the new offense we were trying to learn. And then we'd go run routes, lift weights and watch more film getting ready for the season. It was like being with a coach.

"He would teach on the things you could do better. You could give your own input like, 'I saw this on this route' or, 'How do you want the steps?' I improved this season. Just getting a head start on the new offense allowed me to learn it much quicker and get a connection with him."

Broncos wide receiver Andre Caldwell: "I like his personality. A lot of people see him on the field and in interviews and think he's strictly business. Nah, he likes to have fun. He tells jokes every day clowning on people. He's clowned on me. He spreads it around to everybody. You can't get all slippery around him either because he's going to get you. As soon as you meet him, you can see the personality in him. He doesn't shy away from anybody. He's friends with everybody.