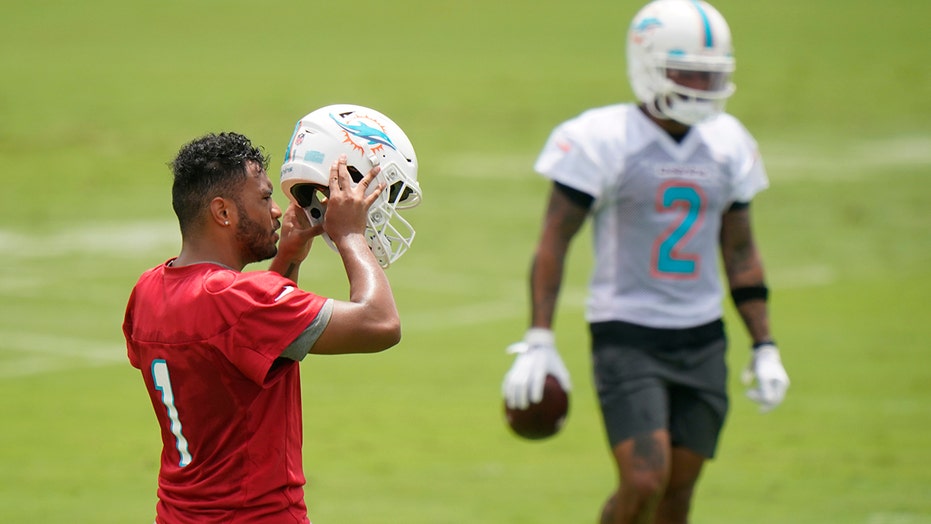 Tua Tagovailoa threw five interceptions in practice on Tuesday. Worse, all those giveaways came with the player who picked off more passes than anyone else in the NFL last season nowhere to be found.

Xavien Howard was a no-show for the first day of the Miami Dolphins' three-day mandatory minicamp, with coach Brian Flores saying it was "a contract situation" — a clear indication that the All-Pro cornerback who led the NFL with 10 interceptions last season wants to renegotiate a contract that he already reworked two years ago.

"We love X," Flores said. "Let me just go ahead and say that right now so you guys can make sure you write that. We love him. He’s very productive. He’s a team player. He’s an important player on this team. But again, unique situation. We want to keep him here."

The Dolphins' defense didn't seem to miss him Tuesday.

Granted, it was just practice, much of which was held in an absolute downpour; footballs were wet, players were slipping and any sort of visibility was more of a wish than a reality during the worst of the rainfall. One of the interceptions by Tagovailoa was returned to the end zone by linebacker Nik Needham, who did a little dance as he headed back to the defensive huddle.

They all weren't Tagovailoa's fault, and Jacoby Brissett threw a pair of interceptions as well during the workout. And part of it, Tagovailoa said, was a conscious decision to make some riskier throws and see what happened.

"The emphasis for us quarterbacks, we wanted to be aggressive today within the pass game," Tagovailoa said. "We wanted to see if we could fit throws in. We wanted to see what throws we could make under these conditions. We're just trying to push the ball vertical down the field. There were some plays that didn't go our way, but those are plays we can take a look at in the film room and move forward with."

He's entering his second season in Miami after his stellar collegiate career at Alabama, and with Ryan Fitzpatrick now in Washington, it would seem the starting job is Tagovailoa's from the outset of this season. Tagovailoa completed 64% of his passes last season, with 11 touchdowns and five interceptions in 290 attempts.

The expectation also was to have the whole team at minicamp. There's no indication if Howard will attend before the sessions end Thursday.

"I haven’t seen him, so I expect him to be here, but I have not seen him yet," Flores said.

Howard led the NFL with 10 interceptions last season — only two other players in the league had more than five. The 2016 second-round draft pick out of Baylor helped Miami reach the 10-win mark for the third time in the last 17 seasons.

Howard is due to make about $12 million in base salary this season, the second year of a five-year, $75 million extension that could run through 2024. Howard already having gotten one extension from Miami makes his case a bit different from some other contract issues that the Dolphins have addressed of late, including the $39 million, three-year extension linebacker Jerome Baker got over the weekend.