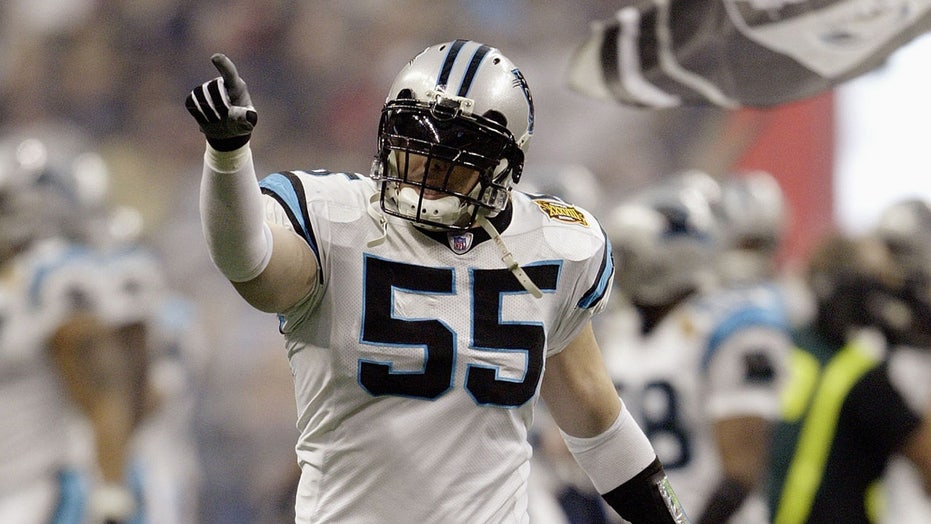 Defense will be immensely important for the Kansas City Chiefs and the San Francisco 49ers heading into Super Bowl LIV next month.

The Chiefs and the 49ers both boast talented defenses with star defensive linemen and linebackers who can wrap offensive players up and make tackles to thwart momentum or save a game.

Anthony Hitchens and Damien Wilson were some of the Chiefs’ top tacklers this season. Fred Warner and Dre Greenlaw were the top two tacklers for the 49ers. Out of those four players, Warner is the only player to have recorded more than 100 total tackles in 2019 finishing with 118.

Here are some of the best tacklers the Super Bowl has ever seen in a single game.

Will Witherspoon made several tackles in Super Bowl XXXVIII. (Photo by Elsa/Getty Images)

The Carolina Panthers needed their defense to step up against the New England Patriots in Super Bowl XXXVIII. Though the Panthers gave up 32 points in the 32-29 loss, players like Will Witherspoon, Mike Minter and Dan Morgan made every effort they could against the Patriots.

Witherspoon recorded 13 tackles in the game – which is tied for third-most in a single Super Bowl game. Minter and Morgan would also set Super Bowl high marks.

Lance Briggs and the Bears' defense had to deal with Peyton Manning. (Photo by Brian Bahr/Getty Images)

Chicago Bears linebacker Lance Briggs would tie Witherspoon’s mark with 13 tackles in Super Bowl XLI against the Indianapolis Colts. Eleven of his 13 tackles were solo.

Briggs also had one pass defended and a tackle-for-loss in the game. However, the Colts pulled out the victory behind Peyton Manning. Indianapolis won, 29-17.

Keanu Neal was close to the tackles record, but came up short.. (Photo by Focus on Sport/Getty Images)

Atlanta Falcons linebacker Keanu Neal neared the record for most total tackles in a Super Bowl game against the Patriots in Super Bowl LI but came just short.

Neal finished with 13 tackles, like Briggs and Witherspoon before him. Nine of his 13 tackles were solos. The Falcons blew a 28-3 lead in the game and lost to the Patriots in overtime, 34-28.

Mike Minter followed the performance of his teammates Will Witherspoon and Dan Morgan in Super Bowl XXXVIII against the Patriots.

Minter finished the game with 14 tackles – the second-most in a single Super Bowl game. He had seven solo tackles and assisted on six others. He also had one pass defended.

But Minter’s performance wasn’t good enough to set the record.

Dan Morgan owns the record for most tackles in a game. (Photo by Elsa/Getty Images)

The record for most total tackles in a game belongs to Dan Morgan – who had 18 against the Patriots in Super Bowl XXXVIII. Morgan had 11 solo tackles and assisted on seven others.

Carolina’s linebackers may not have won a Super Bowl ring, but they will be forever remembered for their performance on the defensive side of the ball in that game.