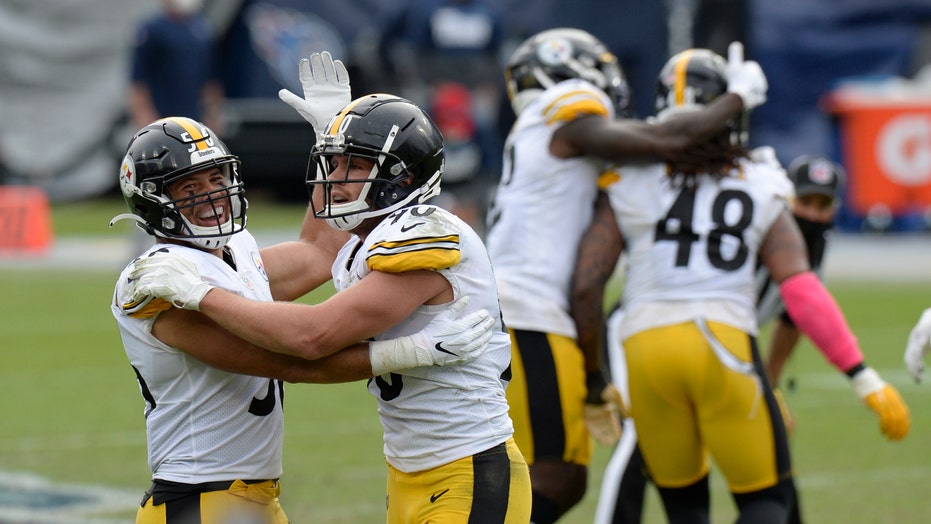 Ben Roethlisberger threw two touchdown passes to Diontae Johnson, and the Pittsburgh Steelers remained perfect by holding off Tennessee for a 27-24 victory Sunday in a game postponed three weeks after the Titans came down with the NFL's first COVID-19 outbreak of the season.

In a matchup of the AFC’s two remaining undefeated teams, the Titans rallied by scoring 17 straight after being dominated in the first half. They failed to complete the comeback when Stephen Gostkowski, who made a 51-yarder earlier, missed from 45 yards wide right with 14 seconds left that sent the Steelers running around the field in celebration with the Titans (5-1) stunned.

“Oh, man. I mean, I was surprised he missed it,” Steelers wide receiver JuJu Smith-Schuster said. "Our idea was to go into overtime. A good kicker. It’s tough. It’s good for us.”

The Steelers improved to 6-0 for their best start since 1978, when Pittsburgh won its first seven on the way to the Super Bowl. This was just the fifth time undefeated teams had met in Week 7 or later, and the winner of the previous four all made the Super Bowl.

“We feel we have a really good football team,” Roethlisberger said. "We feel we can be really special ... That’s going to be a short-lived happiness because we know what’s coming next.”

What comes next? A matchup with the rival Ravens.

Benny Snell Jr. added a 1-yard TD run, and Ray-Ray McCloud set up a touchdown with a 57-yard punt return. Pittsburgh scored at least 26 points for a sixth straight game to tie a stretch in 2015 for the longest in franchise history.

The Steelers were without cornerback Mike Hilton, one of their best blitzers, not that the NFL's No. 2 defense in both yards and points allowed missed him much. Pittsburgh outgained Tennessee 362-292 and held the NFL's second-best scoring offense under 31 points for the first time since the opening week of the season.

But the Titans had won four of their first five by rallying in the final two minutes of regulation or overtime, and they set up Gostkowscored 17 straight to pull to 27-24.

Ryan Tannehill hit A.J. Brown on a short pass that the receiver took to the end zone for a 73-yard TD. Jayon Brown picked off a batted pass, setting up Gostkowski's field goal. Derrick Henry capped the 12-play drive with a 1-yard TD with 10:13 left.

The Titans had the final chance after Amani Hooker intercepted Roethlisberger's pass to Smith-Schuster in the back of the end zone with 2:35 left. It was Roethlisberger’s third of the game, which Tennessee turned into only a field goal.

Gostkowski had won the first three games this season for Tennessee with late field goals.

“It was a gut punch to see that kick go wide right,” Tannehill said. “Had a ton of confidence going out there that Stephen was going to nail that kick. Unfortunately, it was a little bit wide.”

Pittsburgh dominated early with a 161-1 edge in total offense before the Titans' second offensive possession. The Steelers led 24-7 at halftime.

Roethlisberger and the Steelers scored a touchdown on their opening drive for the first time in 23 games, going 75 yards over 16 plays. Roethlisberger had his 1-yard TD pass to James Conner wiped out by penalty so he hit Johnson for an 11-yard TD and a 7-0 lead.

Snell Jr. capped the Steelers' second drive for a 14-0 lead.

Steelers defensive end Chris Wormley was hurt early in the fourth. Johnson went to the sideline after a key third-down catch late in the game with an apparent right leg injury. He missed last week's game with a back injury.

Titans outside linebacker Jadeveon Clowney hurt his left knee early in the third quarter but returned. Titans cornerback Kristian Fulton hurt a knee late in the first half.

Steelers: Visit Baltimore in a game rescheduled because of the Titans' outbreak with the Ravens coming off their bye.

Titans: Visit Cincinnati in their first road game since Sept. 27.