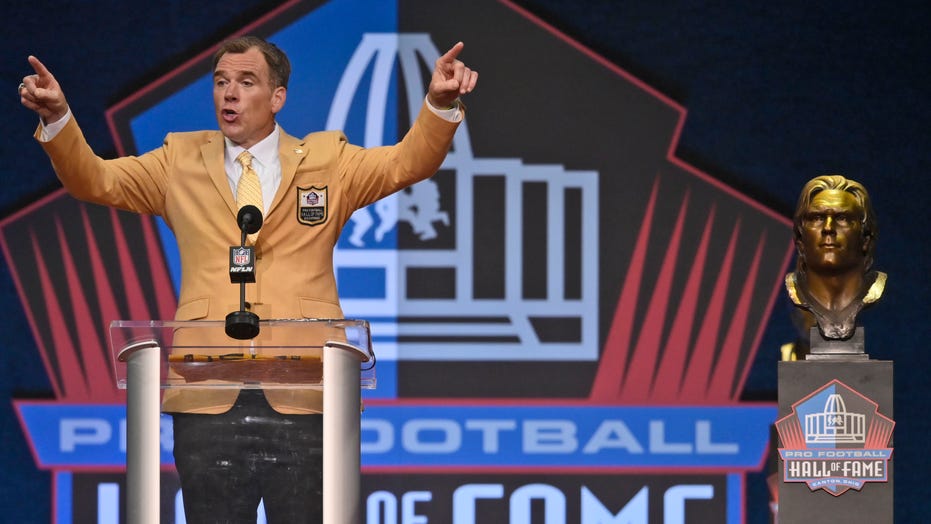 Alan Faneca’s name was etched into the walls of football history when he was inducted into the Pro Football Hall of Fame earlier this month. But for the longtime Pittsburgh Steelers guard, the golden jacket symbolizes more than just the mark of the legends.

Faneca, 44, was finally inducted into the Hall of Fame in his sixth year of eligibility in what he told Fox News in an interview over the weekend felt like "the end of a journey."

"There’s so many times you’re out there, you’re running, you’re in the heat and you’re working out, and you’re like, ‘Can I make it?’" he said. "Two-a-day practices from junior high through high school through college through the NFL. It’s like an accumulation of everything put together and all of a sudden – you’re striving to be the best for ever and ever – and all of a sudden you’re in the room and you are one of the best. It’s so surreal."

From left to right, Tom Flores, Charles Woodson, Alan Faneca, Calvin Johnson, John Lynch and Drew Pearson pose with their busts during the induction ceremony at the Pro Football Hall of Fame, Sunday, Aug. 8, 2021, in Canton, Ohio. Peyton Manning, whose bust is at center, was not present. (AP Photo/Ron Schwane, Pool)

A first-round draft pick out of LSU, Faneca played the majority of his career in Pittsburgh, where he was named to six Pro Bowls and was a key component in the Steelers' 2005 Super Bowl victory over the Seattle Seahawks. He would earn two more Pro Bowl selections with the New York Jets before retiring with the Arizona Cardinals in 2011.

Faneca struggled to describe the induction ceremony in Canton, Ohio, on Aug. 8 – an experience that left Peyton Manning struggling to hold back tears.

"Utterly amazing to go in, be around those guys – be one of those guys – and to share that with my family and friends and with everybody who helped me on this journey because nobody gets there by themselves," Faneca said.

Few players will ever get to share the honor bestowed on Faneca. In fact, there are only 353 members since the first class was enshrined in 1963, but for Faneca, the journey was especially difficult.

"Fifteen was a transformative year for me," Faneca recalled during his speech. "My dream of playing in the NFL was awakened, and that was when I was diagnosed with epilepsy. I vividly knew that I was not going to let anything prevent me from fulfilling this dream."

He continued: "I always told myself, and have spoken about the fact that epilepsy is part of me, but it does not define me. We are in charge of our destiny. I never want any challenges to define us. We must define ourselves. Whatever one’s challenge in life, whether we have a disability or not, my message is always to maintain an integral commitment to not let anything stop us from fulfilling our vision. We all get knocked down in life, but it’s how we get up that matters."

Faneca echoed that sentiment in his interview with Fox News, adding that the lowest points of his career were the most impactful.

"Those are moments where you have to pick yourself up off the floor."

His resilience made him a better football player – and a better father. Faneca says one of his daughters also suffers from a rare form of epilepsy and that his experience with the disease has helped him to understand her struggles better.

"Maintaining a healthy lifestyle, putting your body first, knowing when to say when – when you have to step away, when you know how you’re feeling – and what you need to do when you’re not feeling quite right," he said. "To see your own daughter have to learn to walk and learn how to ride a bike multiple times as a parent, its hard."

Faneca said he looks forward to being able to use his Hall of Fame platform to bring more awareness to the disease. He recently partnered up with SK Life Science on its campaign STEPS Toward Zero.

"Once I found out what it was about, to educate and empower the epilepsy community and help them reengage their doctors – it was a no-brainer for me," he said.