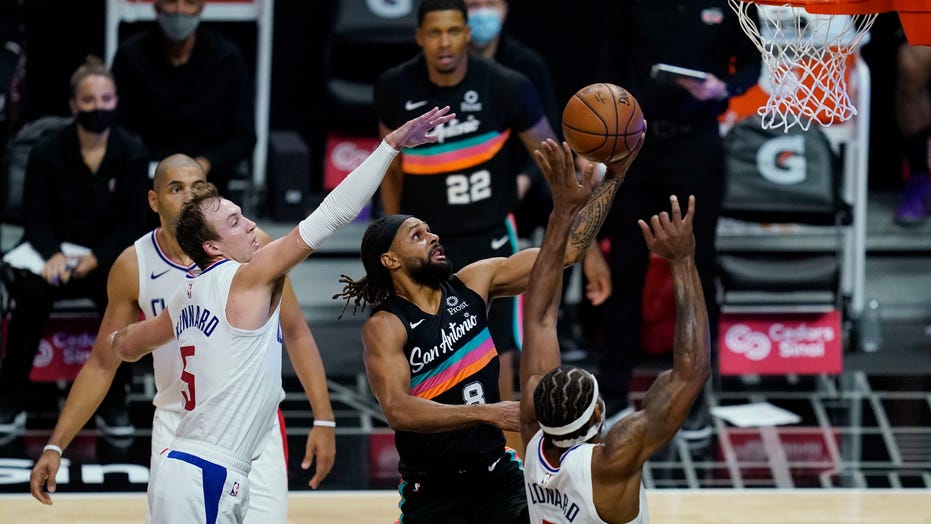 Patty Mills hit a career-high eight 3-pointers and scored 27 points off the bench, and the San Antonio Spurs defeated the Los Angeles Clippers 116-113 on Tuesday night to snap a four-game skid.

Dejounte Murray added 21 points, Rudy Gay had 16 points, LaMarcus Aldridge 14 points and Keldon Johnson grabbed a career-high 11 rebounds for the Spurs. They led by 24 in the first quarter and withstood an onslaught by Kawhi Leonard in the third before nearly blowing their lead in the fourth.

The Spurs tied a franchise record with 20 3-pointers.

"It was a mentality we came out with on the defensive end. It has nothing to do with shooting the ball," Mills said. "Playing team defense like that fuels the fire and confidence for everyone to be able to play with the same sort of energy."

Leonard scored a game-high 30 points and had 10 assists. He had 11 points in the third, when Patrick Beverley made three 3-pointers, and the Clippers closed within one. Nicolas Batum had 21 points and nine rebounds, and Beverley finished with 20 points.

"He was pushing the pace in transition, getting to the paint and throwing it out to shooters," Leonard said of Beverley. "He was very active on defense."

The Clippers were without Paul George, who tweaked his ankle in Sunday’s win over Phoenix. They sorely missed his averages of 25.1 points, 5.7 rebounds and 5.1 assists per game.

The Spurs opened the fourth with a 12-2 run that restored their lead to double digits. Mills hit three 3-pointers in a row to extend San Antonio's lead to 111-96.

But the Clippers kept clawing. They closed the game on a 17-5 run despite Leonard scoring just two points in the fourth quarter, when his shot from the right side with five seconds left missed under defensive pressure from DeMar DeRozan.

"That’s what we wanted," Spurs rookie guard Devin Vassell said. "We knew they couldn't get an open 3 off."

The Clippers scored 40 points in the third to pull to 85-84. Leonard had 11 points and Beverley hit three 3-pointers to help them rally from 19 down at halftime.

The Spurs opened the second quarter with an 18-3 run that pushed their lead to 54-30. Five players scored, led by Murray with five points. Leonard scored the Clippers' final 11 points.

Spurs: They have the franchise's youngest roster since Gregg Popovich became coach in 1996, with an average age of 25.5 years.

Clippers: F Marcus Morris Sr. has yet to play this season because of a sore right knee.

"Four days in your room in LA. Shoot me." — Popovich on playing back-to-back games in the same city.

Spurs: Stay in Los Angeles to face the Lakers on Thursday.

Clippers: Visit Steph Curry and Golden State on Wednesday in the first of a back-to-back.