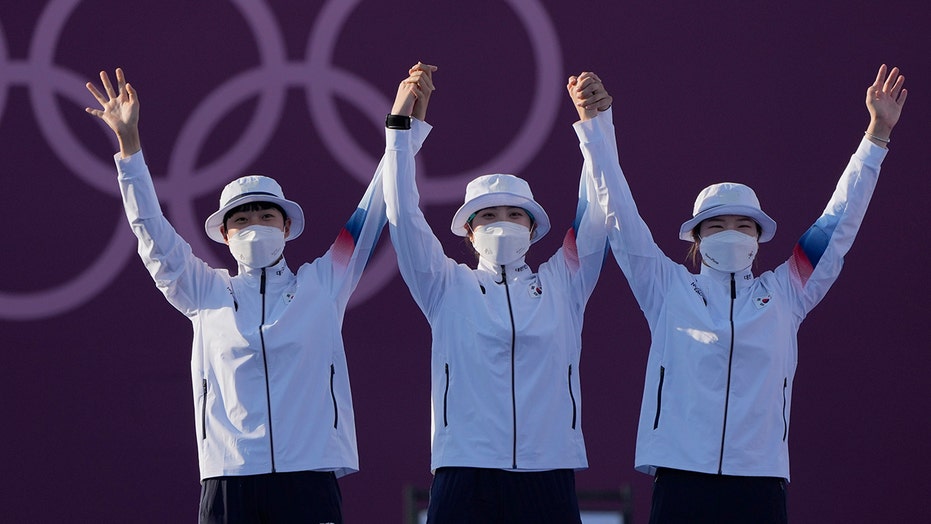 The names on the South Korean women's archery team may change, the domination with a bow sure doesn't.

The powerhouse archery nation is now 9 for 9 in the women’s team event since it was added to the Olympic program at the 1988 Seoul Games. The contingent of An San, Kang Chae Young and Jang Minhee made sure they kept South Korea's streak rolling right along by beating ROC, the acronym for the Russian Olympic Committee, 6-0 in the final on Sunday at the Tokyo Games.

"It is an honor to show archery of Korea is the best," Kang said.

Here's something the rest of the archery world doesn't want to hear: The nation has another young standout in An, who's 2 for 2 in gold medals in as many days. She paired with Kim Je Deok to win in the Olympic debut of the mixed team competition.

It’s all such an overwhelming ride for the 20-year-old An, who has another chance to medal in the individual competition on Friday.

"I’ve achieved what I had planned," she said. "I would now like to enjoy the remainder of the matches."

Kang has a theory on why her team performs so well under the brightest of lights — the competitions in practice.

"In Korea, I think that it’s really all neck-and-neck and all of our athletes are very strong," she said. "That makes us all strong as a group."

The nine consecutive gold medals in the women’s team competition puts South Korea in some exclusive company. They join the U.S. men’s swimming 4x100 medley relay and the Kenyans in the men’s steeplechase for the longest active Olympic winning streaks.

Jang secured the win with a score of 9 on her final arrow as South Korea cruised past ROC, which was represented by Svetlana Gomboeva, Elena Osipova and Ksenia Perova.

Gomboeva suffered a scare in the ranking round Friday, when she collapsed because of the extreme heat.

"Indeed, I had a fear I could let down my teammates," Gomboeva said through an interpreter. "After the incident, I spoke to my coach and said the worst thing is behind me. ... That somehow quieted me down. Today, it was not that bad."

The bronze medal went to Germany after a 5-1 win over Belarus. The German squad was made up of Michelle Kroppen, Charline Schwarz and Lisa Unruh, who wrapped up the medal with a 10 on the final arrow. Unruh was second in the individual competition at the 2016 Rio Games.

"I was really glad it went down this way," Unruh said.

Asked about South Korea's dominance, Perova responded: "We are behind from our Korean colleagues."

On Sunday, the South Korean team was a combined 17-1 in its wins over Italy, Belarus and ROC. The women’s team competition consists of each squad shooting six arrows — two for each athlete — as part of a set. The team with the highest score receives two set points and the first to pick up five set points wins.

Here's an indication of just how strong of a team South Korea fields: Kang was left off the squad for the 2016 Rio de Janeiro Games.

"I’ve grown as an athlete from that experience," the 25-year-old Kang said. "I’m now stronger when I’m attending these matches. With that mentality, I can focus much better."

She also has a motivational message on her phone — just in case.

An frequently gives herself pep talks during matches as well.

"I tell myself that I’ve done well, I’m doing well, I’m going to do well in the future," An recounted. "I want to tell myself I’ve been doing well and can actually do this."

One of the elements making things tricky Sunday was the breeze, which was made even more difficult to gauge with no fans in the stands to provide a little wind protection.

"Your flags can be saying one thing and where your arrows drift can say something completely different," explained American Mackenzie Brown, whose team was knocked off by ROC. "It’s hard to plan for. You have to take it for what it is, and go up and make really strong shots and hope for the best."

The men's team event is Monday, when South Korea will again be the favorite.