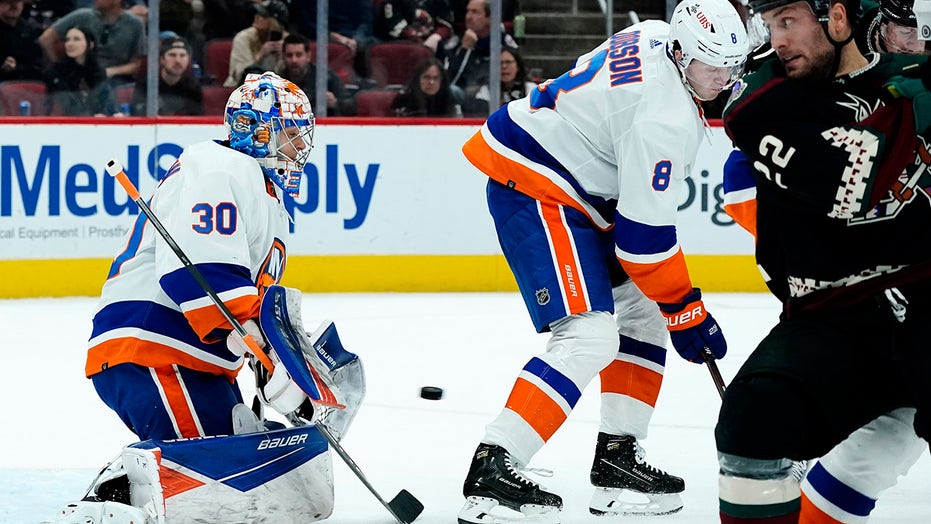 Brock Nelson had a goal and an assist, Ilya Sorokin stopped 26 shots and the New York Islanders kept the Arizona Coyotes winless with a 3-0 victory Saturday night.

New York got off to slow starts in the first two periods, but Sorokin made some tough saves for his fourth shutout in 27 career games. Cal Clutterbuck and Anthony Beauvillier also scored for the Islanders, who have five points in three games after two opening losses.

"They didn’t give us much really in the game, but we were able to capitalize on some chances and Ilya made a couple of key saves," Islanders coach Barry Trotz said.

Arizona played perhaps its best game of the season and still came away with a loss.

The Coyotes limited shots on defense, controlled the puck for long stretches of the opening two periods and created plenty of good scoring chances. They just couldn't get anything to go into the net, whether it was because of Sorokin or a bad bounce.

Karel Vejmelka had 21 saves for Arizona, which has one point (0-4-1) in five games this season.

"It’s one of those nights where we deserved something to show for it," Coyotes first-year coach Andre Tourigny said. "I believe it will balance out by the end of the season, but I'm proud of the effort, proud of the focus."

The Islanders arrived in the desert for game five of their season-opening 13-game road trip while construction of their new arena is being completed.

New York missed an opportunity for a second straight win on Thursday, failing to convert when a Columbus player lost his stick before giving up the overtime winner to Patrik Laine.

The Islanders are still ahead of the Coyotes' pace. Arizona has struggled mightily defensively with a rebuilt roster, allowing at least five goals three times while being outscored 22-8 through the first four games.

The Coyotes dominated early, holding New York with a shot on goal the opening 8 1/2 minutes. Sorokin made some tough saves in his fifth straight start — the best on Liam O'Brien from just outside the crease — and Clutterbuck scored late in the first period by keeping it on a 2-on-1, then beating Vejmelka to the glove side.

The second period had a similar feel.

The Coyotes limited New York's shots early, Sorokin made some tough saves and the Islanders scored late. Nelson got it on a power play when a shot by Josh Bailey from between the circles caromed off him past Vejmelka.

Beauvillier made it 3-0 midway through the third period, using a deke to get Vejmelka out of position on a mini breakaway.

"We had chances, were strong on the puck, we created loose pucks and we did the right thing," Beauvillier said. "We had chances and it was a big win for us."

The Coyotes were going to need some time to gel with an overhauled roster, and expected to hit some bumps along the way.

Perhaps the slowest area to come around is on the penalty kills.

"As a unit, we have a lot of guys who haven't killed before," O'Brien said. "Obviously, you don't want to make excuses, but we're trying to work on things every game."

New York’s Zdeno Chara played in his 1,613th career game, passing Ray Borque for fourth on the NHL’s all-time games played list by a defenseman. ... Arizona F Johan Larsson played in his 450th career game. … New York’s Kyle Palmieri had a goal waved off midway through the third period after officials ruled Vejmelka had frozen the puck upon review.

Arizona: Plays at Florida on Monday.