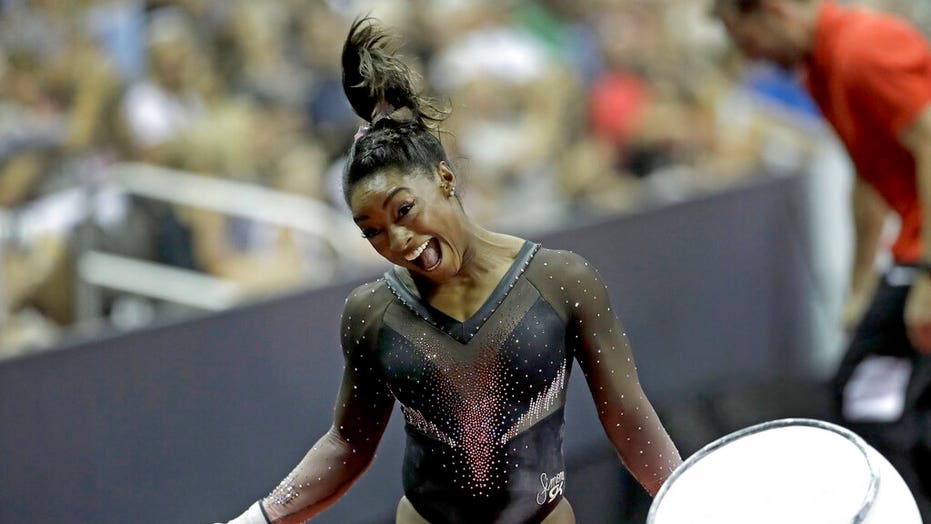 As she won her sixth U.S. women's gymnastics title Sunday, Simone Biles hit yet another historic milestone — this time, during her floor routine.

Biles, 22, performed a stunning triple-twisting double-flip during the final night of the Women's Gymnastics Championship in Kansas City, Mo.

Fans cheered on the five-time Olympic medalist as she went for the landing at the end of her tumbling pass, nearly coming in out of bounds, but in the end landing with her feet firmly within the floor area.

The crowd went wild for Biles, who's not only considered one of the greatest gymnasts of her generation, but of all time. As soon as she finished her performance, Biles said she grabbed her phone to watch a video of the routine before she headed off to compete in vault.

“I didn’t want to be the last person to see it,” she said, according to Team USA. “So I went online to see what it looked like.”

The tumbling pass – three twists and two flips – was the first of its kind landed in women's gymnastics history, and came after Biles made history Friday night at the competition when she became the first gymnast ever to attempt a double-twisting, double somersault dismount from the balance beam.

Biles went into the second night of championships with a 1.75-point lead, and ultimately scored 118.500 throughout the event — nearly five points clear of Sunia Lee, who came in second, and almost seven points ahead of third-place finisher Grand McCallum.

She won her sixth all-around title at the event. The last time a female gymnast earned six U.S. titles was 67 years ago in 1952, when Clara Lomady won.

Following her routines Sunday, Biles said she "was a lot happier" than after her performance on Friday.

"I feel I haven't been as confident on bars this year as I was last year," she said. "To finally do a good routine like I can do it, I was really happy. I was very happy and the last event, so I was like, 'Thank God we're done.'"