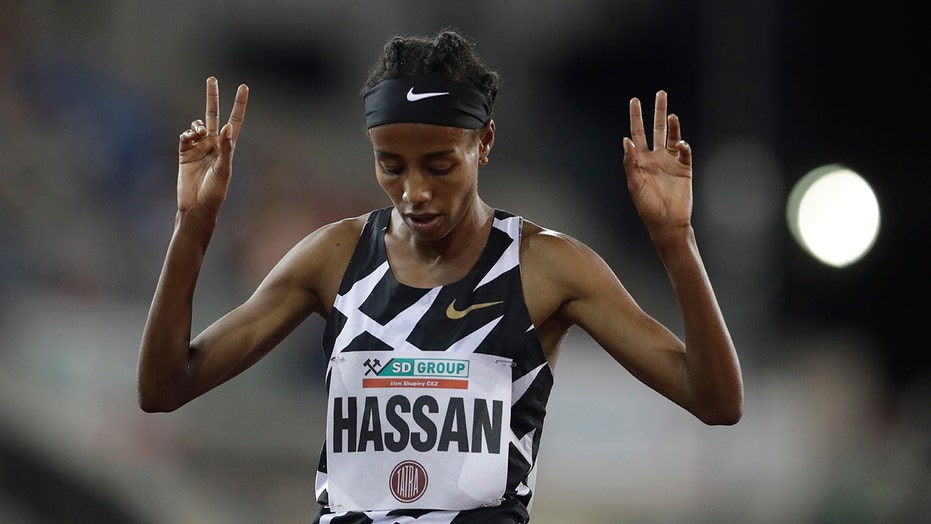 Sifan Hassan's schedule on the Olympic track looks more like a list of punishments drawn up by a very angry physical education teacher.

And do them all in the sapping heat and humidity of the Tokyo summer.

"Right now ... if you can see inside my mind, you will think I’m crazy or something."

The proposed schedule isn't the result of a whole lot of long-term planning either from the world champion in the 1,500 and 10,000, who was born in Ethiopia but competes for the Netherlands. Rather, it was conceived after some unexpected late form in the 1,500 a few weeks ago.

Hassan, who holds world records in the mile and 5-kilometer road race, and held the 10,000-meter record for two days in June, had initially planned to do a more reasonable but still ridiculously hard 5,000-10,000 double at the Tokyo Olympics. She got to thinking when she ran the second-fastest time this year in the 1,500 last month, even if it was in a loss to Olympic favorite Faith Kipyegon of Kenya.

There was still enough from that performance in Monaco to suggest to Hassan that she might have a chance at a medal in all three in Tokyo. She's also second-fastest in the world in the 10,000 and in the mix in the 5,000.

"This year I’m healthy, I’m in the best shape of my life, I have big dreams," she said. "I’m in such good shape with these three events I don’t know what to do, and that’s amazing for me."

Hassan may reconsider taking on the terrible triple by the time track and field starts at the Olympics on Friday, when she’s due up in the 5,000 heats on the first evening of action at the Olympic Stadium. She said: "I’ll see where I am."

But there's surely many a distance-running enthusiast who hope she does go through with it. A medal in all three track events would be one of the feats of the Tokyo Olympics, or any Olympics. Three golds would be fantasy land.

In defense of her sanity, Hassan does have something solid to work off; her 1,500 and 10,000 double at the 2019 world championships in Doha, Qatar. She became the first athlete, man or woman, to do that. She was also under severe scrutiny at that meet for her connection to former coach Alberto Salazar, who was banned for four years for doping offenses while the worlds were going on.

"The hardest moment of pressure in my life (was) in Doha and I managed it," Hassan said. "I think in Tokyo it’s going to be OK."

Temperatures in Tokyo are forecast to be near 30 degrees Celsius (86 degrees Fahrenheit) this weekend when track and field starts.

And then there’s Hassan’s opposition. Kipyegon is the defending Olympic champion in the 1,500, Hellen Obiri of Kenya is a two-time world champion, and Gudaf Tsegay of Ethiopia is the world leader in the 5,000.

And, lastly, Letesenbet Gidey of Ethiopia, the woman who broke Hassan's 10,000-meter world record after it stood for 48 hours in June and who will be aware of Hassan's crazy plan.

"You know how good Letesenbet is," Hassan said. "She's not going to have mercy on me. She’s going to say ‘OK ... let’s make you pay the price.’ That’s what I'm scared of."