Three NFL teams stayed in their locker rooms during the national anthem ahead of NFL games on Sunday, as a growing number of players from other teams joined in protest by kneeling on the field.

As the national anthem rang out at Nissan Stadium in Nashville, neither the Tennessee Titans nor the Seattle Seahawks were out on the field. Earlier in the day in Chicago, all but one of the Pittsburgh Steelers remained in the locker room during the anthem ahead of their game against the Bears.

Ahead of Sunday night's game, many Oakland Raiders and Washington Redskins sat or kneeled, as others stood and linked arms.

In all, more than 100 NFL players from several teams across the country kneeled or locked arms Sunday, after President Trump lashed out at the protesters and called for those who disrespect the flag to be fired or suspended. One Steeler was seen just outside the players' tunnel at Soldier Field: offensive tackle Alejandro Villanueva, a former Army Ranger. 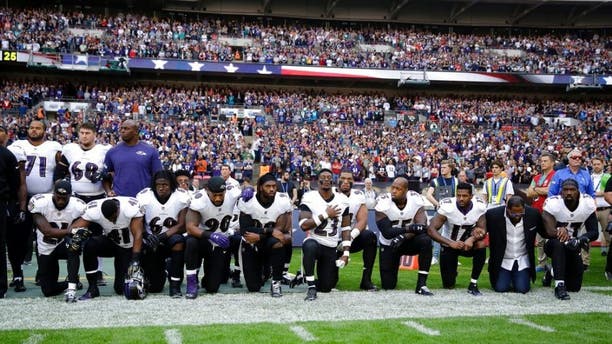 Baltimore Ravens players, including former player Ray Lewis, second from right, kneel down during the playing of the U.S. national anthem before an NFL football game against the Jacksonville Jaguars at Wembley Stadium in London on Sunday. (AP)

NFL Sunday began with members of the Jacksonville Jaguars and the Baltimore Ravens either taking a knee or locking arms as the U.S. national anthem was sung at London's Wembley Stadium.   Those who were not kneeling, including the coaches on both teams and Jaguars owner Shahid Khan, locked arms during the national anthem. The players then stood up for “God Save the Queen,” the British anthem.

Members of the Seahawks and Titans marched out onto the field with arms linked after the anthem was played. Some people in the crowd booed as the players finally emerged.

Pittsburgh's coach, Mike Tomlin, stood by himself on the sideline in Chicago. Tomlin had said before the game that Pittsburgh’s players would remain in the locker room and that “we’re not going to let divisive times or divisive individuals affect our agenda.” Tomlin added that the Steelers made this choice “not to be disrespectful to the anthem but to remove ourselves from this circumstance. People shouldn’t have to choose.”

Most teams in the early afternoon games locked arms in solidarity. At least three team owners joined their players. Several New Orleans Saints players sat during the national anthem. The Jaguars tweeted a photo shortly after the team's defiant message with the caption: “Unity.” Ravens owner Steve Bisciotti released a statement posted on Twitter after the incident, saying: “We recognize our players’ influence. We respect their demonstration and support them 100 percent. All voices need to be heard. That’s democracy in its highest form.”

The display marked a tumultuous weekend between the NFL and Trump, who called the players kneeling during "The Star-Spangled Banner" disrespectful. Trump took note of the incidents at the start of the games on Sunday.

"Great solidarity for our National Anthem and for our Country. Standing with locked arms is good, kneeling is not acceptable. Bad ratings!" Trump tweeted.

"...NFL attendance and ratings are WAY DOWN. Boring games yes, but many stay away because they love our country. League should back U.S.," he tweeted.

Trump's criticism began on Friday during a rally in Alabama when he called for players to be fired who disrespect the American flag.

"Wouldn't you love to see one of these NFL owners, when somebody disrespects our flag, to say 'get that son of a b ---- off the field right now? Out! He's fired! He's fired,'" Trump said to the crowd.

"Divisive comments like these demonstrate an unfortunate lack of respect for the NFL, our great game and all of our players, and a failure to understand the overwhelming force for good our clubs and players represent in our communities," Goodell said.

Goodell announced on Twitter Sunday that a video titled, "Inside These Lines" will air during Sunday night's game as a sign of unity in the league.

Trump stood by his words on Saturday when he rescinded Golden State Warrior Stephen Curry’s invitation to the White House this spring to honor his team’s 2017 NBA championship. He then suggested that NFL players who kneel during the patriotic song should be fired.

Former San Francisco 49ers quarterback Colin Kaepernick began the controversial movement last year when he refused to stand during “The Star-Spangled Banner” to protest police brutality against the African-American community. Kaepernick has since become a free agent, but he has not yet been picked up by any team.

A number of players wore shirts during warmup Sunday that said "#IMWITHKAP" in support of Kaepernick.