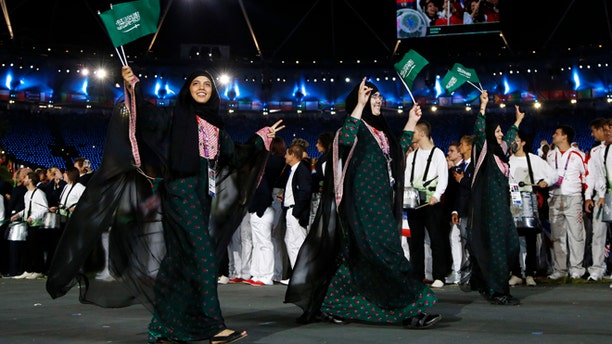 A female judo fighter from Saudi Arabia will be allowed to compete in the Olympics wearing a form of headscarf after a compromise was reached that respects the "cultural sensitivity" of the Muslim kingdom.

Judo officials had previously said they would not let Wojdan Ali Seraj Abdulrahim Shahrkhani compete in a headscarf because it was against the principles of the sport and raised safety concerns.

But an agreement was reached after several days of IOC-brokered talks between the International Judo Federation and the Saudi Olympic Committee that clears the way for her to compete Friday in the heavyweight division.

"They have a solution that works for both parties, all parties involved,"' International Olympic Committee spokesman Mark Adams said. "The athlete will compete."

The agreement was later formally announced in a joint statement by the judo federation and the Saudi committee.

"Working with the IOC, a proposal was approved by all parties," the statement said. "The solution agreed guarantees a good balance between safety and cultural considerations."

Ali Seraj Abdulrahim Shahrkhani, the judoka's father, declined to describe what changes -- if any -- will be made to his daughter's head cover for the competition.

He told The Associated Press his daughter has been training with women at a special facility in London for an hour and a half every day since she arrived with her parents and her brother. Shahrkhani said his daughter, who has a blue belt in judo, is preparing for Friday's fight in seclusion.

"It's her first time in competition and it's the Olympic Games, so she is focused on that," Shahrkhani said.

Saudi Arabia, which had never sent female athletes to the Olympics before, brought its two first female Olympians to London on condition they adhere to the kingdom's Islamic traditions, including wearing a headscarf.

Shahrkhani's participation was thrown into doubt last week when judo officials said a headscarf could be dangerous because of chokeholds and aggressive grabbing techniques.

Without giving precise details, Adams said the headscarf agreement is in line with Asian judo rules and is "safety compliant but allows for cultural sensitivity."'

"In Asia, judo is a common practice so they asked for something that would be compliant with that, and the judo federations have reached a compromise that both are happy with," he said.

Asian judo federations have previously allowed Muslim women to wear the headscarf, known as a hijab, during major competitions. Headscarves are allowed in taekwondo, but taekwondo fighters also wear a headguard, which covers the headscarf.

Shahrkhani may be the first judoka to fight at the Olympics who does not hold a black belt in judo, a Japanese martial art. She did not qualify for her Olympic spot like most of the other judo fighters. The IOC extended a special invitation for her to compete as part of negotiations to bring Saudi women to the Olympics for the first time. The other Saudi female athlete to compete in London is 19-year-old Sarah Attar, a California-based 800-meter runner.

Saudi Arabia, Qatar and Brunei had been the only three countries that had never fielded female Olympians in their teams. With all three now including women, these are the first Olympics in which every competing nation -- 205 -- is represented by female competitors.

"Our aim is that we want to have women from all national Olympic committees competing in the games," Adams said. "Clearly one of those that is new is Saudi. We want to make sure we give a maximum chance for women from every NOC to take part in the games."