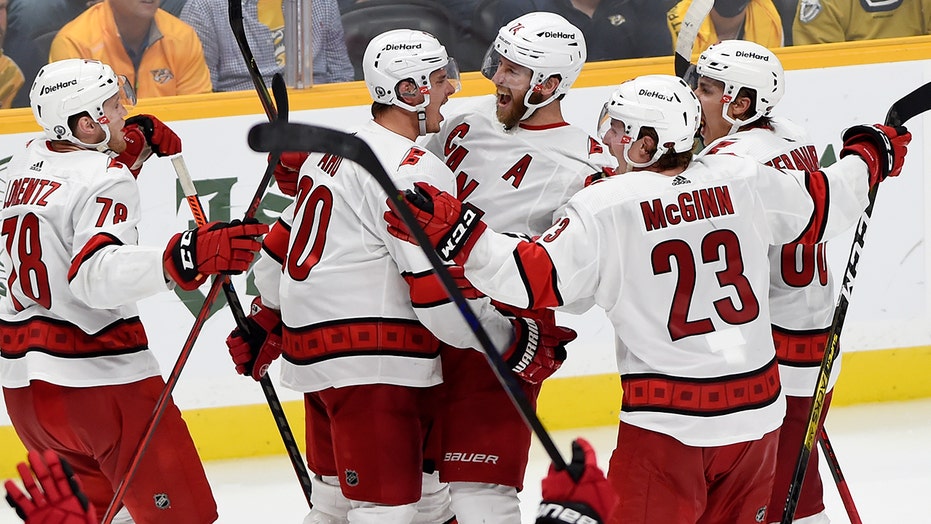 Yet the Hurricanes showed enough resilience to push through and advance anyway, earning a second round matchup with reigning Stanley Cup champion Tampa Bay.

The Hurricanes beat the Nashville Predators 4-3 in overtime on Thursday night to close the best-of-seven series in six games. That came after they rallied from a two-goal deficit while playing a fourth consecutive game that extended past regulation time.

Nothing came easily for the Hurricanes, who won the Central Division — their first division crown since their Cup-winning season in 2006 — and were in the Presidents' Trophy race to the regular season's final week.

The Hurricanes jumped out to a 2-0 series lead against Nashville. But they lost Game 3 in double overtime, followed by Game 4 the same way, then had to rally in the third period of Game 5 to win it on Jordan Staal's rebound chance in OT.

In those six games, the Hurricanes surrendered the game's first goal five times.

"We kind of got behind the 8-ball in most of the games," said Brock McGinn, who scored all three of his series goals on the road.

One of the reasons the Hurricanes overcame those issues was the play of rookie goaltender Alex Nedeljkovic as the every-game starter, a position he doesn't look likely to relinquish against the Lightning.

There was some question as to whether coach Rod Brind'Amour would use a rotation, as he did in last year's playoffs with Petr Mrazek and James Reimer. But Brind'Amour stuck with the 25-year-old Nedeljkovic, who had ranked among the league leaders with a 1.90 goals-against average and a .932 save percentage in the regular season.

He was strong throughout the Nashville series, even turning away a 2-on-0 rush by the Predators in Game 4, while providing a lift with his puck-handling ability.

The other positive developments were on the health front. McGinn returned to the lineup after missing 19 games to end the regular season, scoring twice in Game 4 and working alongside Aho on Carolina's reshuffled lines for Game 6.

Then there was Slavin, who suffered a lower-body injury in the second-to-last game of the regular season at Nashville. Brind'Amour had said that injury would likely make Carolina's top defenseman a game-time decision for the foreseeable future.

Slavin logged more than 21 minutes in Game 1, then missed the next three games before returning in Game 5. He assisted on Carolina's tying and winning goals on Thursday night, feeding a cutting Hamilton with a perfect pass off a faceoff win by Aho, before firing the Aho-tipped winner off another faceoff win by Aho.

"As much as I hated sitting out those games, I think it was the right move," Slavin said. "The past two games, I felt good out there, I felt confident in my skating abilities and just being able to help the team out and not hinder them in any ways."

The Hurricanes will have home-ice advantage against the Lightning, and they'll have even more rowdy fans. The team announced Wednesday that the NHL had granted approval for PNC Arena to host an increased capacity of more than 15,000 fans, up from about 12,000 against the Predators.

That came after the arena installed a 500-ton chiller to increase air flow while ensuring integrity of the ice despite the rising temperatures outside, allowing for increased capacity for all the remaining home playoff games.

There could be plenty more, too, if the Hurricanes keep battling like this.

"You've got a special group here," Brind'Amour said. "I mean, I know every coach would say that about their team. But we're proving it over and over and over. And that's special."