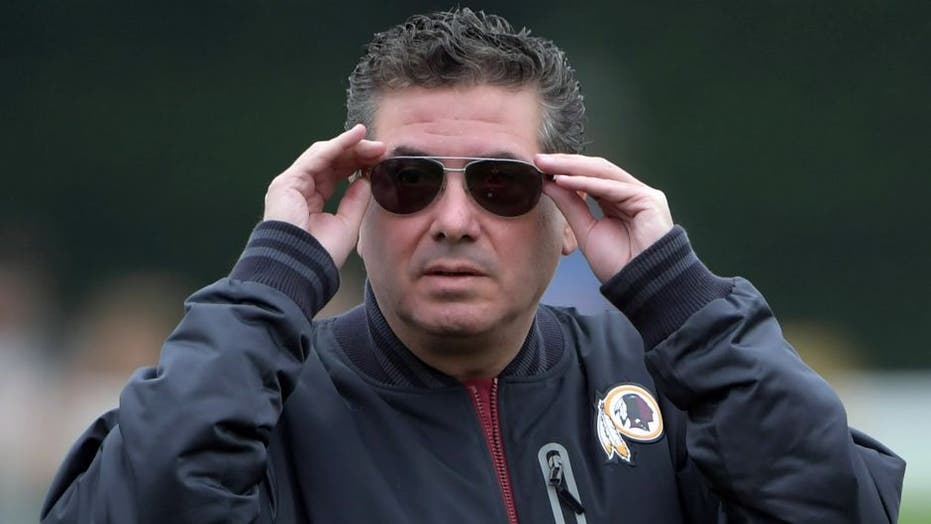 Daniel Snyder bought the Washington Redskins in 1999 but he has never faced as much pressure to change the name of the team as he is facing now, when symbols and statues of the country's past have been torn down or removed amid heightened scrutiny about what those things really mean.

The Redskins name has been a source of controversy for about a month now, as politicians, media and now corporate sponsors have all asked Snyder to do without the name that has been a part of the organization since 1933, when the team was originally named the Boston Redskins.

Snyder has relented in the past.

In 2014, Snyder told ESPN that he wasn’t going to succumb to pressure to change the name because he felt that the term “Redskins” wasn’t disparaging to Native Americans but rather was a term that dignified them with honor and respect. He also pointed to two Native Americans — William Henry “Lone Star” Dietz, whom the team was named after to honor his heritage, and Walter “Blackie” Wetzel, a former Native American leader who helped design and approve the team’s logo.

“It's just historical truths, and I'd like them to understand, as I think most do, that the name really means honor, respect,” he told ESPN at the time. “We sing 'Hail to the Redskins.' We don't say hurt anybody. We say 'Hail to the Redskins. Braves on the warpath. Fight for old D.C.' We only sing it when we score touchdowns.”

When asked what a “Redskin” was, Snyder replied: “A Redskin is a football player. A Redskin is our fans. The Washington Redskins fan base represents honor, represents respect, represents pride. Hopefully winning. And, and, it, it's a positive. Taken out of context, you can take things out of context all over the place. But in this particular case, it is what it is. It's very obvious.”

In that same year, 50 senators agreed that the Redskins should change their name. One letter to Roger Goodell asked the NFL Commissioner to push the organization to rename the team citing the NBA’s push to remove Donald Sterling as the owner of the Los Angeles Clippers when he was heard spouting racist remarks in a recording.

“We urge you and the National Football League to send the same clear message as the NBA did: that racism and bigotry have no place in professional sports,” senators wrote at the time.

Snyder told USA Today in 2013 the team would “never change the name of the team.”

The recent national conversation about racism has renewed calls for the Washington Redskins to change their name. D.C. Mayor Muriel Bowser called the name an "obstacle" to the team building its stadium and headquarters in the District, but owner Dan Snyder over the years has shown no indications he'd consider it. (AP Photo/Alex Brandon, File)

“As a lifelong Redskins fan, and I think that the Redskins fans understand the great tradition and what it's all about and what it means, so we feel pretty fortunate to be just working on next season,” he told the newspaper.

He added: “We'll never change the name. It's that simple. NEVER — you can use caps.”

Admittedly, the social climate was different six and seven years ago. Things appeared to start changing in the beginning of 2020. Recent public opinion polls appear to favor the Redskins name, and a University of California, Berkeley study published in February said that at least half of the Native Americans surveyed were offended by the term. The publishers of the study were adamant about their results, according to WUSA9.

Previous polls from The Washington Post, among others, had shown that Americans weren’t offended by the name.

The shift in public opinion seems connected to the May 25 death of George Floyd, the Minneapolis man who died after an officer kneeled on his neck for more than 8 minutes in a moment caught on cellphone video.

The Redskins team posted a black square on its Twitter page to show solidarity with the Black Lives Matter movement.

Rep. Alexandria Ocasio-Cortez, D-N.Y., was among those who called out the team to change the team name if they were really supporting the call for social justice.

Two weeks later, The Washington Post editorial board called on the team to change the name, despite its own 2016 polling revealing that Americans weren’t offended by the name.

“This should be an easy call. Mr. Snyder — or, if Mr. Snyder refuses to back down from his declaration of “NEVER,” the NFL — should take advantage of this singular moment in history to get on the right side of history,” the newspaper said. “Change the name. NOW.”

Even as the calls grew louder, the Redskins’ wallet was never really threatened — until this week.

The team is looking to move to a new stadium in the near future, but their relocation from Maryland to the RFK Stadium in D.C. now hinges on the organization’s willingness to change its name, The Washington Post reported on Wednesday.

Nike also appeared to remove Redskins gear from its website. Merchandise disappeared one day after a group of 87 investment firms sent letters to three of the Redskins’ prominent corporate sponsors. Nike, FedEx and PepsiCo were urged to pressure Washington team officials to change the name and to end their business relationships with the franchise if ownership would not comply.

Washington has not commented on the recent developments but one thing is for sure: the calls for the team to change their name have never been louder than they are now.