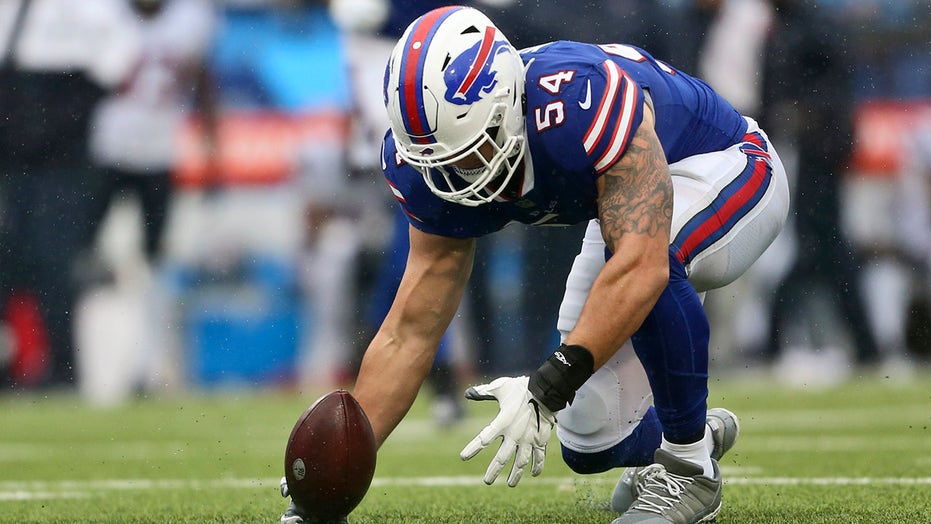 Buffalo Bills linebacker A.J. Klein wears a unique, protective necklace that’s become as much part of his uniform as his helmet and shoulder pads.

The Q-Collar is a non-invasive device worn around the neck to aid in the protection of the brain from effects associated with repetitive, sub-concussive head impacts. A plastic band made with a spring-loaded steel core slips around the neck. The band places about 1.2 pounds of pressure onto the wearer’s internal jugular vein, which carries oxygen-free blood from the brain back to the heart.

Dr. Julian Bailes, the former team physician for the Pittsburgh Steelers, began researching different ways to protect the brain during sports participation over a decade ago. After he was approached by inventor Dr. David Smith, Bailes studied how to protect the brain from the inside instead of simply putting more protective layers around it.

The result was the Q-Collar, which received marketing clearance from the FDA in February. Klein has been wearing it since five-time All-Pro linebacker Luke Kuechly introduced him to it when they played together in Carolina.

"I looked at all the research and I decided to wear it," Klein said. "If anything, it’s going to make me feel more secure, more protected. It’s actually weird now. If I don’t have it on when I’m on the field, I feel kind of naked. So it’s one of those things that I have adapted to that I feel like I have to wear one."

"Once I was introduced to it, I wore it all the time," said Davis, who played for San Francisco, Denver and Washington from 2006-19. "I would wear it when I was riding my bike. Whatever it was, if I had to do something with physical activity, I was wearing it."

The Tampa Bay Buccaneers are the winner of the 2021 Inclusion Award for the team’s efforts as a leader in gender equality.

The announcement was made at Twickenham Stadium in London at the 7th annual Leaders Sports Awards banquet, celebrating organizations that are pushing boundaries and setting the example throughout the sports industry.

"Establishing a culture of inclusivity is important to the team and our belief in supporting opportunities for individuals from all backgrounds," said Bucs co-owner Darcie Glazer Kassewitz.

Leaders in Sport evaluated projects and initiatives that foster inclusion, equality and diversity, and appeal to communities irrespective of age, sexuality, gender, disability, religion or belief. The group cited the Bucs as "the embodiment of the inclusion category."

"Through the team and the Tampa Bay Buccaneers Foundation, their programs have created change in a male-dominated industry, demonstrating how football is a game for everyone, regardless of gender. The Inclusion Award is designed to celebrate and award those who have challenged the norm within sport ..." the organization noted.

Last year, the Buccaneers launched the Girls in Football Scholarship, becoming the first NFL team to create an academic college scholarship for high school seniors who play football and are pursuing a career in sports.

So now that Tom Brady holds the NFL record for yards passing, who is in line to catch him?

According to Sidelines, which analyzed data for each quarterback’s average season passing yards, reaching more than 80,000 yards through the air might be, well, a reach.

Closest is Pittsburgh's Ben Roethlisberger, who would need about five more seasons to get there. Struggling this season, Big Ben is more likely to retire after 2021.

Matt Ryan, who is with a rebuilding Atlanta Falcons team, also would need five years. At least Ryan would only be 40 then; Roethlisberger would need to keep playing until he is 43.

Aaron Rodgers needs about six seasons, which also would bring him to age 43. At least Rodgers still seems to be at his peak.

It's a long way off for the likes of Russell Wilson (12 seasons) Patrick Mahomes (14) and Dak Prescott (15), but at least they are at or approaching their prime.

Then again, Brady might put that record into six figures.

The Philadelphia Eagles Autism Foundation and the 2021 Eagles Autism Challenge raised more than $2.7 million for autism research and care, thanks to donors from 15 countries, 1,850 participants, and 12,819 donations.

All of the participant-raised funds will be directed to autism research and programs.

Since the first year of the Eagles Autism Challenge in 2018, 36 countries and 76,788 donations have contributed to the more than $12 million raised.

"We all clearly know the passion that Eagles fans have for their football team," says team owner Jeffrey Lurie, "but more importantly, I have found over the years that it is their generosity, empathy, and commitment to important causes such as this that truly define them. The progress we have made – which has positively impacted so many families around the world – would not be possible without our fans and supporters of the Eagles Autism Foundation. As we reflect on this amazing year, we also look ahead to a future of endless possibilities thanks to the support that we are so fortunate to have."

Participants had the option to choose from three cycling routes in addition to a 5K Run/Walk and a family friendly Sensory Walk. Supporters who wanted to fundraise but were unable to ride, run, or walk had the option to register as a virtual participant.

"While this past year and a half has presented us all with many unique challenges, the one remaining constant has been the unwavering dedication to our mission by everyone who has embarked on this journey with us," said Ryan Hammond, executive director of the Eagles Autism Foundation. "Every dollar raised by the Eagles Autism Foundation is invested back into cutting-edge autism research and care at the top medical institutions in North America."

The Eagles Autism Foundation is inviting researchers to apply for grant funding to support basic and clinical autism research, studies concentrating on impacted individuals and families, and diverse model systems.

The Centers for Disease Control and Prevention estimates that one in 54 people living in the United States are on the autism spectrum.

Just as the Saints have utilized Hill, the Falcons gave Franks a brief look at tight end in the rookie’s first action in the team's lone win so far, at the New York Giants. On the active roster for the first time, Franks played two snaps at tight end. He also took one snap at quarterback, handing off.

The 6-foot-6, 235-pound Franks broke free on some quarterback runs in the preseason. Smith described the former Arkansas and Florida quarterback as "a hell of an athlete."

Franks signed with Atlanta as an undrafted rookie. Smith said the idea of using Franks at other positions has "kind of evolved."

"I think New Orleans kind of set the stage for everybody, and everybody’s been looking for that type," Smith said. "... Taysom’s the only guy that I’ve seen that truly can play multiple spots. ... We’ll continue to kind of kick the tires on it, see if it gives us anything, but it’s credit to Feleipe because Feleipe’s worked really hard about trying to become a professional quarterback."