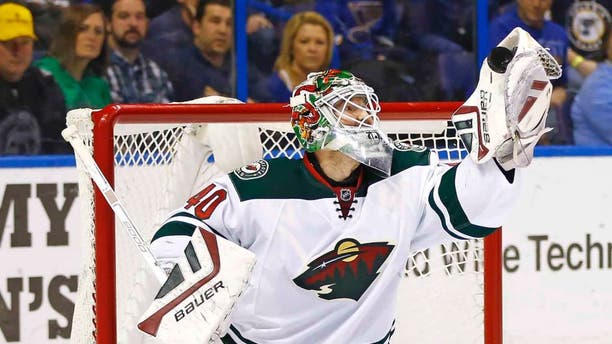 The character of the Minnesota Wild continues to be tested amid one of the roughest stretches in club history.

Mired in their worst-ever home slide, the Wild look to avoid matching the team record with an eighth consecutive loss overall Saturday against the Boston Bruins, who are looking for a season-high sixth straight road victory.

"If this wasn't really maddening and really frustrating, it would almost be comical the way things are going right now," coach Mike Yeo said.

"It's definitely frustrating," defenseman Ryan Suter told the NHL's official website. "We usually have to hit rock bottom before we go up, and I feel like we've hit rock bottom. Now we just need it to start turning for us."

Perhaps Minnesota can start by faring better in the second period, during which it's been outscored 13-3 in the last five games. The Wild allowed Washington's Alex Ovechkin to record a hat trick during the second in Thursday's defeat.

Minnesota has yielded four goals in each of the last four contests and at least that many in six of seven. Its last three opponents have gone 5 for 14 on the power play after the previous 15 were 4 for 31.

"Getting tired of it, really," said forward Charlie Coyle, who has recorded five of his career-high 15 goals in eight games. "We've got to find ways. You keep seeing we're taking strides and that's the positive thing to do, and I think we are. But we've got to get that end result."

Loui Eriksson registered his third career hat trick in that meeting with Minnesota, and he had a goal and an assist as Boston (29-19-6) opened its season-high six-game trip with a 6-2 victory over Winnipeg on Thursday. The Bruins have outscored their last five road opponents 20-8.

"It was a huge start, that's what we wanted," said forward Patrice Bergeron, who scored twice to snap a five-game goal drought. "But we know there's a lot more to this road trip than just one game and now we need to focus on Minnesota."

Brad Marchand had a goal and two assists and Brett Connolly recorded three assists as the Bruins rebounded from Tuesday's 9-2 defeat to Los Angeles.

"Different guys stepped up," said Connolly, who had one point his previous nine games. "And that's what we're going to need going forward on this road trip if we want to make it successful."

Tuukka Rask made 34 saves Thursday and has a 1.72 GAA during a four-game road winning streak.

Eriksson has six goals in the last five matchups with Minnesota while Bergeron has two and two assists during the same span.

Boston has gone 3 for 35 on the power play in the last 12 contests.