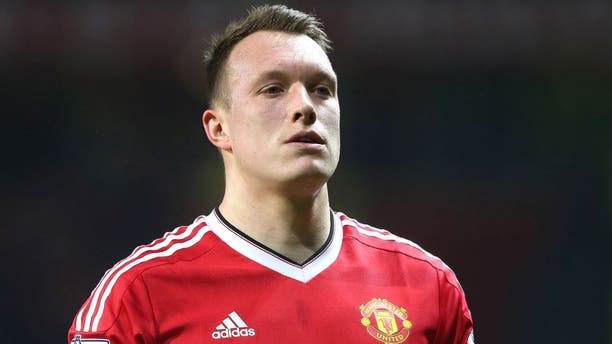 Phil Jones insists Manchester United can still win the league even though they are currently on their worst run of form in 26 years.

United will stretch their winless run to nine matches in all competitions unless they defeat Swansea at Old Trafford on Saturday.

The poor run of results has caused Louis van Gaal's team to drop out of the top four and exit the Champions League.

United start 2016 in sixth position, some nine points behind leaders Arsenal, but Jones believes the Premier League is so haphazard in nature this year that he and his team-mates can still top the table come the end of May.

"It's strange but the table shows that literally anyone can win the league this season. Arsenal, Chelsea, Leicester, (Manchester) City, ourselves, Tottenham, Stoke, Watford... nobody seems to want to win it," the United defender told MUTV.

"It only takes a good run of five, six, seven games and getting a few wins and it soon turns around. We're disappointed with the way we've played over the past few games, although we did well against Chelsea, but by no means are we out of (the title race). If we can put a few wins together we'll be right back up there."

As Jones points out, there were signs of encouragement in United's performance against Chelsea on Monday.

The match may have ended scoreless, but United put on a thrilling attacking display in the first half and deserved three points.

The Red Devils did look wobbly at times at the back, though. David de Gea pulled off three fantastic saves to keep United in it and luckily for the hosts, Nemanja Matic shot well over when through on goal.

But on the whole, United's defense has been solid this season. They have recorded 10 clean sheets in 19 games and Jones is proud of the achievement.

"I was always taught as a youngster that if you keep a clean sheet you've got a great chance of winning the game and we've done that more often than not this season," he added.

"Norwich and Stoke were games in which we conceded sloppy goals, but other than those matches we've been pretty solid. Everyone who's played has done their job and we hope we can carry that on and produce more clean sheets."

Jones has had to spend most of the season on the substitutes' bench or in the treatment room thanks largely to the form of Chris Smalling and Daley Blind.

Many were surprised when Van Gaal opted to play Blind, whose favorite position is in midfield, at the back, but former United left-back Denis Irwin thinks the former Ajax player has done a good job there this season.

"The two center-halves have been our best players this year," said Irwin, who played 529 times for the club.

"Chris Smalling has been getting all the limelight but I would say the unsung hero so far this season is Daley Blind, we haven't conceded that many and he has been a big part of that.

"He reads the game well and he is a very good footballer as well."

Jesse Lingard is a doubt for Saturday's game because of a hamstring injury that has kept him out for the last three weeks.

Van Gaal tasted defeat in his first match as United manager against Swansea, and has been unable to take a point off the Welsh side since.

The under-fire United manager says his team will be ready for the test that awaits them when the Swans come to Old Trafford on Saturday, though.

"I have lost three against Swansea, and then you have to evaluate why you lost," Van Gaal said.