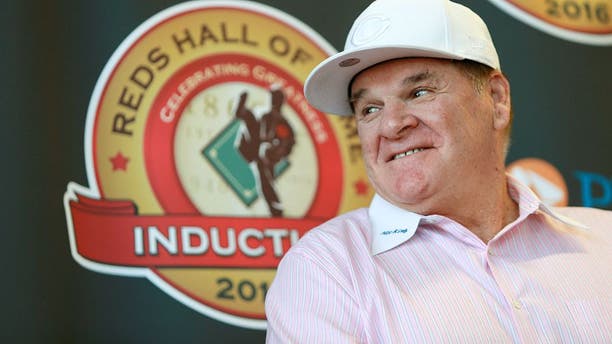 CINCINNATI, OH - JANUARY 19: Former Cincinnati Reds player Pete Rose, attends a press conference at the Champions Club at Great American Ball Park on January 19, 2016 in Cincinnati, Ohio. Rose was introduced as the latest member of the Cincinnati Reds Hall of Fame and will be inducted at a game in June. (Photo by Mark Lyons/Getty Images)

The Cincinnati Reds announced Tuesday that they will induct Pete Rose into their Hall of Fame during the weekend of June 24-26. And then they handed the microphone to the majors' all-time hits leader himself.

As usual, the 74-year-old Rose was full of snappy one-liners on everything from his forthcoming statue to the exact nature of the news conference to the Reds' opponent during that weekend this summer.

A sampling of the tweets from the Reds writers in attendance: