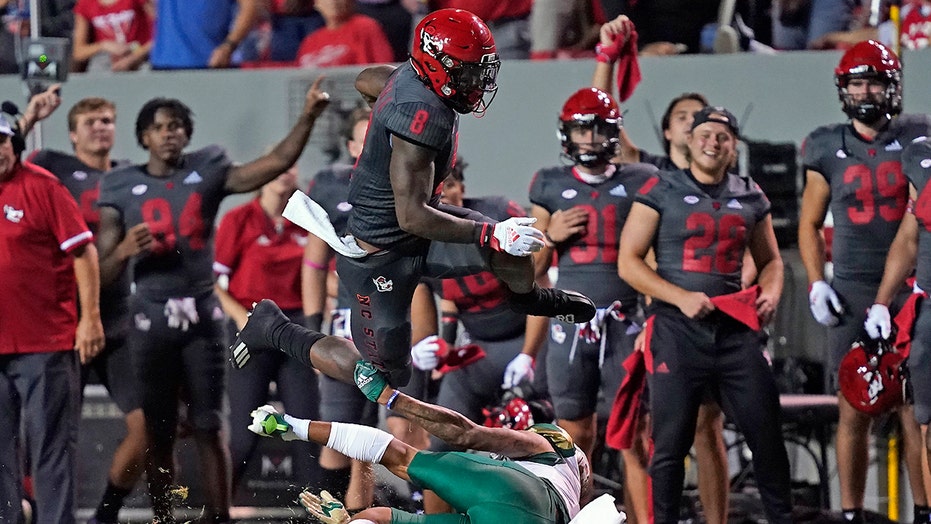 Ricky Person Jr. scored three first-half touchdowns and was one of two North Carolina State players to run for more than 100 yards in the Wolfpack's 45-0 season-opening win against South Florida.

It marked the Wolfpack's first season-opening shutout victory in 17 years.

Person had a 33-yard TD catch from Devin Leary on a perfectly executed wheel route on the Wolfpack's first drive, then scored a pair of 11-yard runs in the second quarter for a 24-0 halftime lead.

It marked the second straight year that Person opened the season with a multi-TD game, and he went on to finish with 105 of his 148 total yards on the ground.

Fellow back Zonovan Knight ran for 163 yards and a 46-yard touchdown, part of a 293-yard rushing day in a dominating performance by N.C. State to start coach Dave Doeren's ninth season in Raleigh.

The Wolfpack also had a solid return from Devin Leary, who was playing for the first time since going down with a broken leg last October. Leary completed 17 of 26 passes for 232 yards and two scores, with his main mistake being an underthrown ball for an interception that could've been a touchdown.

N.C. State had little else go wrong, from the offense rolling right along to the defense making everything difficult for USF and picking off three passes.

That had second-year coach Jeff Scott pulling starter Cade Fortin — a transfer from Wolfpack rival North Carolina — for Timmy McClain before halftime in search of a spark. It didn't work, with McClain throwing a pair of deep-in-Wolfpack-territory interceptions before Fortin returned early in the third quarter.

By the end, USF had managed most of its 271 yards after the outcome was long decided, with Fortin completing 7 of 20 passes for 41 yards and a fourth-quarter interception.

USF: Simply put, this was an awful start to Scott's second season with the Bulls. USF struggled for stops and chain-moving plays all night, with the only drama becoming whether the Bulls would ultimately scratch the scoreboard.

N.C. State: The Wolfpack looked ready from the start with a team featuring 18 returning offensive and defensive starters. Person and Knight both had chunk-play gains, while Leary had multiple sharp throws in his first action in 10 months. The offense finished with 525 total yards while the defense earned its first season-opening shutout since beating Richmond 42-0 in 2004.

USF: Things won't get any easier. No. 13 Florida from the Southeastern Conference visits USF on Sept. 11.

N.C. State: The Wolfpack will face an SEC opponent on the road, visiting Mississippi State on Sept. 11.