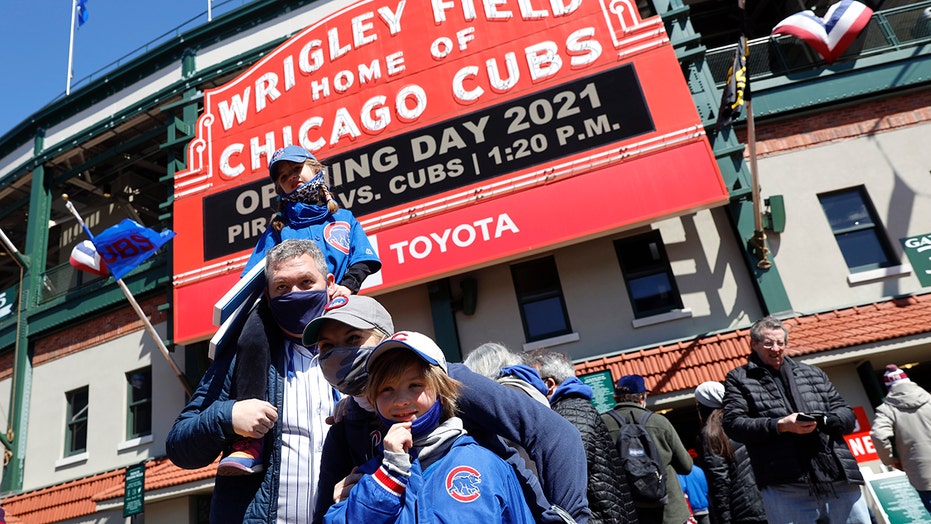 Miguel Cabrera took a trot, eventually, in the snow at Comerica Park. Mookie Betts started the champion Los Angeles Dodgers with a hit at Coors Field. And the Bleacher Creatures did their thing at Yankee Stadium.

All-Stars on the diamond for opening day, fans in the socially distanced stands eager to cheer them.

"Just having those smells hit you, walking in and having that experience back, it’s invigorating," Tonia Smith of Sussex, Wisconsin, said Thursday before Milwaukee hosted Minnesota.

Along with the hits, runs and errors, there was a stark reminder of what baseball went through last year.

The New York Mets’ game in Washington — a prime pitching matchup between Jacob deGrom and Max Scherzer —was postponed because of COVID-19 concerns. Nationals general manager Mike Rizzo later said three players had tested positive for the virus and a fourth was considered a "likely positive."

"It’s one of those things that brings it to light that we’re not through it yet," Atlanta manager Brian Snitker said. "We’re still fighting this. We have to tend to business and not let up. It’s just a reminder that this thing is still out there and real."

Major League Baseball had 45 games postponed because of the coronavirus last season during the shortened, 60-game schedule, when fans weren’t allowed. No games were lost in spring training this year, but that streak didn’t last long.

At Fenway Park, the opener between the Boston Red Sox and Baltimore was called because rain was in the forecast. They’ll start up Friday instead.

"One day, two days, three days — I really don’t care, to be honest with you," Red Sox manager Alex Cora said. "I know there are a lot of guys that are excited, but I think it’s for the best. Tomorrow will be a better day weather-wise."

There were flurries in Cincinnati, where St. Louis newcomer Nolan Arenado singled during a six-run burst in the first inning. It was 36 degrees at Wrigley Field as heralded rookie Ke’Bryan Hayes homered to help Pittsburgh beat the Chicago Cubs 5-3.

And the field looked better suited for snowballs than baseballs in Detroit where it was 32 degrees when Cabrera connected for his 488th career home run. The flakes were coming down so hard, Cabrera couldn’t tell if the ball left the park, and he slid into second base, just in case.

"It was almost kind of laughable for everybody that we were playing baseball in an environment like that," Tiger manager AJ Hinch said after a 3-2 win over Cleveland. "It would come and go, then it got kind of warm when the sun came out. It’s always fun on opening day to take those mental snapshots and enjoy the moment."

A quick note for weather watchers: Yes, MLB has tried in the past to open the season with all games in warmer climates and cities with domes. Fact is, it doesn’t work out that easily. Teams don’t always enjoy starting out on the road.

Clayton Kershaw and the champion Dodgers were in Denver, where it was a picture-perfect 70 degrees. Betts led off the game with a single in front of an estimated 21,363 fans, which was capacity due to COVID-19 restrictions.

The crowd varied at each park. There were 10,850 fans at Yankee Stadium, limited to 20% of capacity. Fans had to show proof of complete vaccination at least two weeks earlier or a recent negative virus test, and masks were required.

The Bleacher Creatures did their Roll Call in the right-field seats and the PA announcer called out "welcome back to Yankee Stadium!"

Facing Fernando Tatis Jr. and the Padres at Petco Park, Arizona pitcher Madison Bumgarner hit a double of his own. After a year experimenting with the designated hitter, National League pitchers are required to bat this season — Bumgarner is among the best of them.

Some fans in San Diego sat on separated squares drawn on the grass beyond the center-field fence. But many fans trying to watch from afar ran into technical difficulties on MLB’s streaming platform.

The league’s fan support Twitter account confirmed MLB.tv was experiencing outages and said MLB was "working on a resolution." The issue appeared to be fixed for most subscribers by the afternoon.

Yet all in all, Texas manager Chris Woodward likes what he's seen so far.

"This whole season, it’s definitely not normal, but it’s more of a return to normalcy than what we had all of last year," he said.