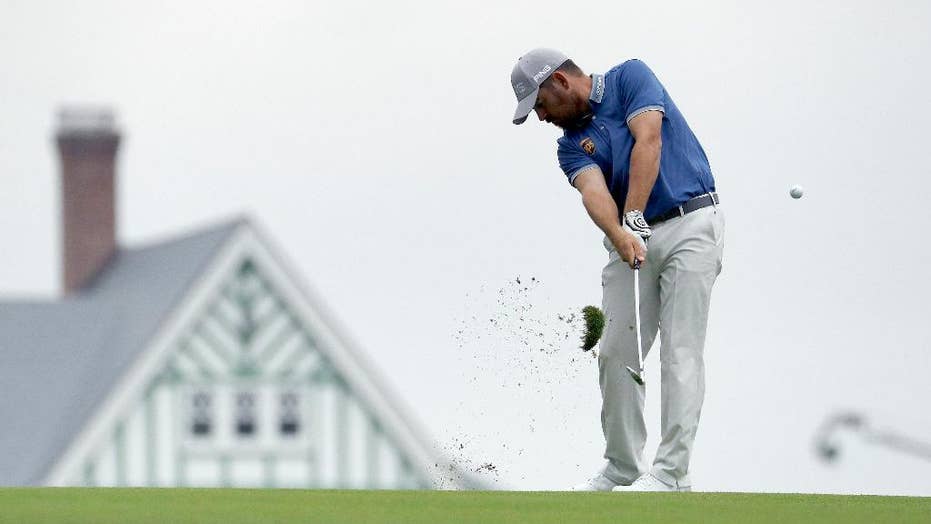 Former British Open champion Louis Oosthuizen got away with an unremarkable first 11 holes Saturday at the Zurich Classic before lifting his team atop the leaderboard with a finishing flourish.

Oosthuizen and Charl Schwartzel birdied six of their final eight holes at a windy TPC Louisiana to shoot a 9-under 63 and take a one-shot lead at 19-under 197 into Sunday’s final round of the PGA Tour's lone regular-season team event.

"It was a very rough first 10 holes for me," Oosthuizen said, referring to his inability to get a single birdie in best ball play during that stretch, when Schwartzel carried the team by making three of his five third-round birdies.

Schwartzel got the South African pair going when he birdied No. 4 with a nearly 58-foot putt.

"In the beginning, it was all on him," Oosthuizen said.

But Oosthuizen birdied No. 12 and the final three holes, highlighted by his 33-foot putt on the par-3 17th. Oosthuizen missed an eagle on the par-5 18th by 4 inches before tapping in for the lead while wearing a somewhat disgusted look because of his narrowly missed previous putt from nearly 17 feet.

Oosthuizen then allowed a smile while fist-bumping Schwartzel in acknowledgment of a successful round that included nine birdies.

Now Oosthuizen heads into Sunday in pole position for his first PGA Tour triumph since winning at St. Andrews in 2010. Schwartzel has not won since 2016 at the Valspar Championship played near Tampa.

The tournament will close with an alternate-shot round.

"It’s going to be tough tomorrow," Oosthuizen said. "Anyone within four shots of the lead has got a chance with the format that it is tomorrow. ... The way the wind is the whole week, I think the golf course plays very tough, especially in alternate-shot."

In all, 17 teams were no more than four strokes back.

Australians Marc Leishman and Cameron Smith also shot a 63 to move into a tie for second at 18 under with Cameron Champ and Tony Finau, who shot a 67 after Finau's tap-in birdie.

"Cam is playing great, putting great. I’m feeling a lot better over the ball today than I did the first two rounds," Leishman said. "If I can play good, Cam keeps doing what he’s doing, I think we’ve got a good chance."

Tied for fourth at 17 under were the teams of Bubba Watson and Scottie Scheffler, and Norwegians Viktor Hovland and Kris Ventura, who'd shared the lead after the first and second rounds.

Watson said his team had a good day in light of the conditions, even as they rued birdie putts that missed by an inch on 6 and 2 inches on 7.

"We had a couple putts that broke one way but the wind was coming the other way, so it made it very tricky," Watson said.

Ryan Palmer and Spaniard Jon Rahm, the defending champs from 2019, shot a third-round 65 to remain in contention at 15 under and tied for ninth with nine other teams.

Saturday's action included some exceptional shots by players further back in the field, including Sam Ryder's double eagle from 206 yards on the par-5 second hole and Wyndham Clark's 106-yard approach from the muddy edge of a water hazard on 16.

Clark stood in the water in bare feet with his pants rolled up and splattered virtually all of himself with mud as he sent his ball to the edge of the green, about 15 feet from the hole, from where he made par.

"The first thing that went through my mind was snakes," Clark said. "And then I was like, well, there’s alligators all over this golf course right now ... and it’s also one of the ponds where there’s big ones.

"I got in quick, and within probably 15 seconds of being in there I pulled the trigger," Clark added.

Clark and teammate Erik van Rooyen were among the teams at 15 under.