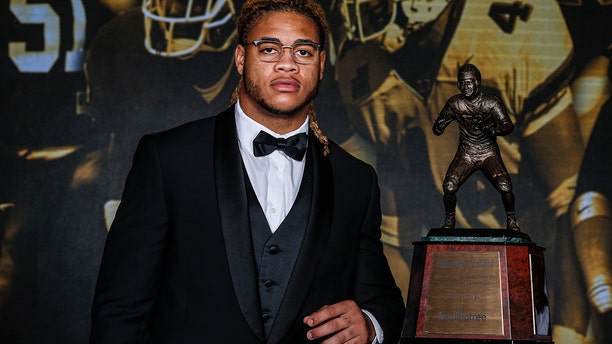 Young was the nation's most dominant player on defense this season, recording 16 1/2 sacks and forcing six fumbles in 10 games for the Buckeyes. His best game came against then-No. 13 Wisconsin when he had four sacks and two forced fumbles in a 38-7 victory.

“It's such an honor to come in here and see all of the great players that have won this award, and have a chance to put my name in that category with some of the all-time great college football players,” Young said. “It's definitely amazing.”

Young received the award Monday night at a banquet sponsored annually by the Charlotte Touchdown Club.

Ohio State coach Ryan Day was on hand for the announcement as the event's keynote speaker.

He praised Young for putting up "ridiculous” statistics this season, and helping his team to an undefeated season so far. Second-ranked Ohio State plays No. 3 Clemson in the Fiesta Bowl on Dec. 28, with the winner advancing to the College Football Playoff National Championship game.

“I knew that he was certainly capable of a season like this,” Day said. “You see him in practice every day, and you see guys make a big jump from year two to year three in college. And he made a big jump just in total production. And, he didn't play in a whole bunch of games in terms of the second half and he missed a couple of games. When he was on the field, his production was just off the charts."

Young dedicated the award to his grandfather, Carl Robinson, who passed away when he was in middle school.

“If he was to see everything I have done this season, he would probably have a heart attack,” Young said. “He would be ecstatic and probably be at a loss for words. We were always close. He would teach me how to make stuff and how to fix stuff and show me off to some of his old school friends. We used to do everything together, almost like a second dad.”

Young is also up for the Heisman Trophy, an award that normally goes to offensive players.

He said his goal this season was to prove that he plays hard every play.

“I'm going to make mistakes, but if you are going 100 miles per hour you might make up for those mistakes,” Young said.

Young said his future NFL team will get a player who is willing and eager to learn.

“I'm going to be a dude who works hard, is not going say too much and just go about his business,” Young said.

Day said Young has a chance to go down as one of the all-time greats, like many of the former Nagurski Award winners.

“Yeah, he's definitely the most dominant defensive player in the country,” Day said. “When you have that type production in a limited amount of snaps, I just think that it is unbelievable.”