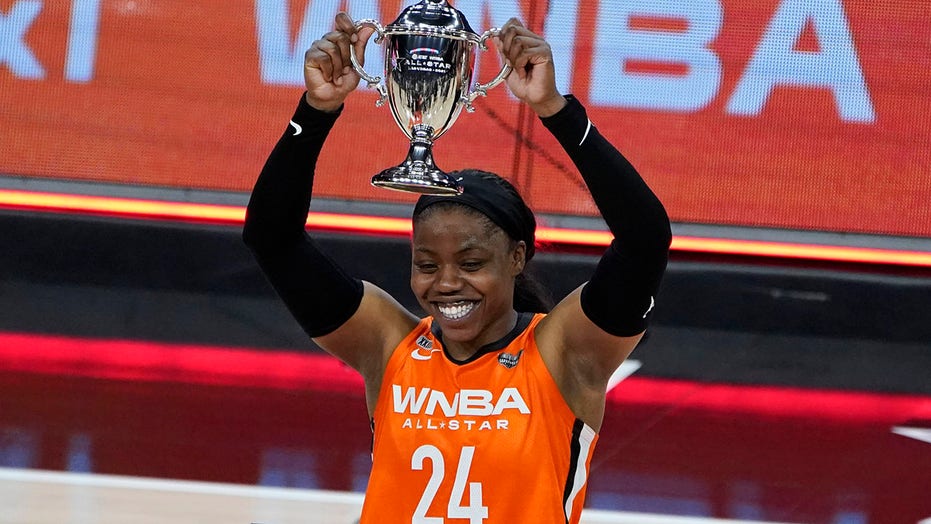 Arike Ogunbowale put on a show against the U.S. national team, handing the Olympic squad a rare loss.

Ogunbowale downplayed that she was trying to make a statement for not making the team headed to Tokyo next week.

"I think that shows that out of 144 players everybody’s good," she said. "We wanted to get Team USA ready for Tokyo. They are representing all of us."

It wasn’t a typical All-Star Game, with the teams playing hard on both ends of the court for the entire game from the start. Usually there isn’t much defense played until late in the fourth quarter.

"It was really competitive," said 12-time All-Star Sue Bird. "Definitely not a typical All-Star game. Usually talk to players about trying to put on a good show and having a good time and hopefully the fans enjoy it. This, right from the tip, felt different. It had an intensity about it you could tell."

The WNBA team led 75-73 midway through the fourth quarter before Ogunbowale had a four-point play to extend the advantage to six. The Olympic squad closed within 83-78 before Ogunbowale hit another 3-pointer and posed for the crowd, which included many current and former WNBA players and team owners.

The Olympic team cut its deficit to 91-85 and had a chance to get closer, but Courtney Williams blocked A'ja Wilson's shot with 1:15 left and they could get no closer.

The Olympic team is a heavy favorite to win a seventh straight gold medal at the Tokyo Games. No team they'll meet has nearly as much talent as the WNBA All-Star team they faced. Still, like the U.S. men's Olympic team which lost consecutive exhibition games to Nigeria and Australia, an American loss is rare.

The U.S. squad has won 49 consecutive Olympic contests dating to 1992.

Brittney Griner scored 17 points and Breanna Stewart had 15 to lead the Olympic team, which had been 3-0 in previous games against WNBA select squads.

Both teams were missing a player. Diana Taurasi suffered a hip injury in practice a few weeks ago and missed the final three games before the Olympic break for the Mercury. She was warming up before the game, but didn’t play.

Liz Cambage also was in uniform but didn’t play. She is on Australia’s Olympic team and the Opals played Nigeria in an exhibition contest on Tuesday. They play the U.S. on Friday.

The U.S. Olympic team jumped out to an 11-4 lead and Team WNBA coaches Lisa Leslie and Tina Thompson called a quick timeout — another rarity in an All-Star Game. After that early burst, neither team could build a lead of more than a few points in the first half. The WNBA All-Stars led 44-43 at the half.

Early in the second half, Candace Parker, who was left off the 2016 Olympic team after winning two gold medals with the U.S., stole the ball from Brittney Griner and scored an easy layup that gave the WNBA All-Stars a 53-48 lead — their biggest of the game to that point.

The game was tied at 66 after three quarters.

"The All-Star Game has a label where it’s a lot of offense and no defense," Stewart said. "This was a game of All-Stars."

Allie Quigley won the 3-point shootout for a third time, beating 6-foot-6 Jonquel Jones in the final. Quigley hit nine of her final 10 shots, including all five from the wing on her "money ball" rack. Each of those was worth two points. Quigley, who also won the title in 2017 and 2018 got a hug from her wife and Chicago Sky teammate Courtney Vandersloot after the victory.

Quigley said that it would be the last time she competed in the contest, which drew boos from the fans.

The WNBA will donate $10,000 to the Patrick Quigley Memorial Scholarship Fund in honor of her dad.

Sami Whitcomb and Jewell Loyd shot well, but couldn't advance to the finals.

The WNBA honored the 1996 U.S. Olympic team that started off the run of six consecutive gold medals that the Americans have won. The current U.S. Olympic team presented their predecessors with flowers, while the 1996 team gave personal notes of encouragement to the current squad.

GETTING READY FOR TOKYO

The U.S. has exhibition games later this week against Australia and Nigeria.