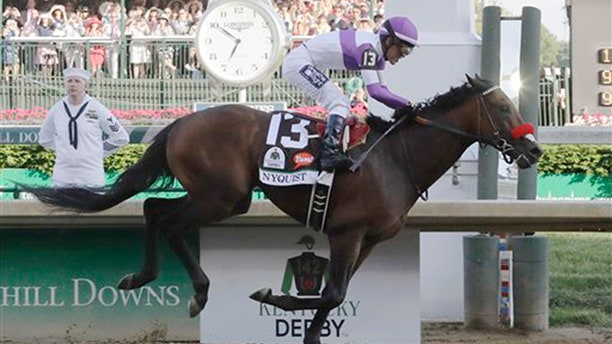 Nyquist won the Kentucky Derby by 1 ¼ lengths on Saturday, improving to 8-0 in his career as the fourth consecutive favorite to win the race.

Nyquist delivered a second Derby win for Gutierrez, trainer Doug O'Neill and owner J. Paul Reddam. They were the team behind 2012 Derby and Preakness winner I'll Have Another.

Nyquist enjoyed a perfect trip over the Churchill Downs dirt in front of 167,227, the second-largest crowd in Derby history. The colt broke well out of the 13th post and showed some early speed getting away from the gate. Gutierrez eased Nyquist back to let speedster Danzing Candy take the lead going into the chaotic first turn.

Nyquist stayed just off the lead and Gutierrez kept him in the clear, steering him to the outside on the final turn. Nyquist and Gun Runner overtook tiring leader Danzing Candy at the top of the stretch.

Gun Runner was only in front briefly before Nyquist showed a strong finishing kick. He put away Gun Runner and sped to the finish line, with Exaggerator closing but never threatening after coming from well back.

A year ago, American Pharoah won the Derby, launching his run to the sport's first Triple Crown in 37 years.

Now Nyquist is the only horse in position to replicate the feat.