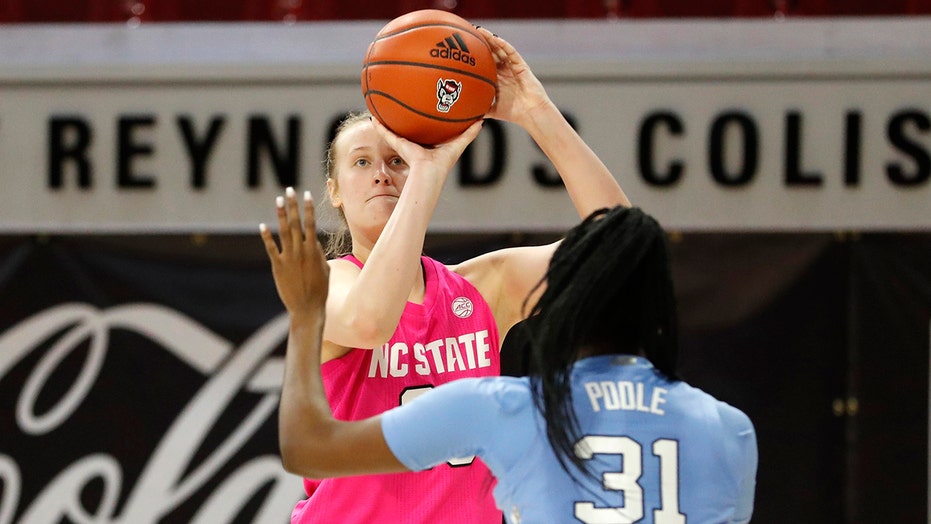 The memories of an upset loss to a rival fueled Jakia Brown-Turner and the rest of her fourth-ranked North Carolina State teammates.

As for coach Wes Moore, he's hoping these final "dress rehearsals" have the Wolfpack getting closer to postseason mode, too.

"It felt great, like we finally played the way we wanted to play as a team," Brown-Turner said. "We didn’t play like ourselves when we played them a couple weeks ago."

Indeed, the Wolfpack (15-2, 10-2 Atlantic Coast Conference) shot 39% in that first meeting while watching a UNC team that hadn't been able to shoot reliably from outside all year make a season-high 11 3-pointers. There was also Moore's observation that the Wolfpack let offensive struggles bleed over to affect their energy and defense as players "hung our heads a little bit."

No such trouble in Round 2.

N.C. State led by 10 at halftime then shot 56% after the break, leading by double figures nearly the entire way.

"I didn’t feel like we didn’t have our best game over there in Chapel Hill," said Kayla Jones, who scored 20 points. "And once we watched film, we saw what we could correct. It made a difference."

The Tar Heels (11-9, 6-9) got no closer than eight after halftime and never recovered from a cold-shooting start.

Freshman Deja Kelly scored 14 points to lead the Tar Heels, who shot just 24% (8 for 33) in the opening half. They warmed up after halftime but finished at 35% for the game, including 5 for 24 from 3-point range.

"We didn't shoot well, for sure," UNC coach Courtney Banghart said. "We're a better team than to just say we didn’t shoot well, though. I don’t think I love a lot of the shots we took in that first half."

UNC: The Tar Heels have helped their NCAA Tournament chances in February and sat at No. 37 in the NCAA's NET rankings. The first-meeting upset win was the first of three straight league victories, which had pulled UNC out of a downward trajectory that had seen it lose six of seven. But the Tar Heels couldn't complete their first regular-season sweep of the Wolfpack since the 2014-15 season.

"We’re kind of in a position where we’re tournament hunting," Banghart said, adding: "I like how we’re playing late. I like the team that we are, and we've just got to take care of our own house."

N.C. State: Sunday offered a reminder of N.C. State's multiple top-flight scoring options. It started with Brown-Turner, who went from 4-for-16 shooting in the first meeting to 10 for 16 in this one and 4 for 5 from 3-point range. Jones had 11 in a 29-point third quarter — ending with her muscling up a shot in the lane before the horn — that helped the Wolfpack stretch out a 10-point halftime lead. There was also another double-double from Elissa Cunane (17 points, 14 rebounds).

"We’d like to probably add one more to the rotation at some point," Moore said. "I know we’re running out of season. But yeah, I like the way we’re playing as a team right now."

The Tar Heels missed their first 16 3-pointers under Petra Holesinska finally connected on a straightaway one with 1:35 left in the third quarter.