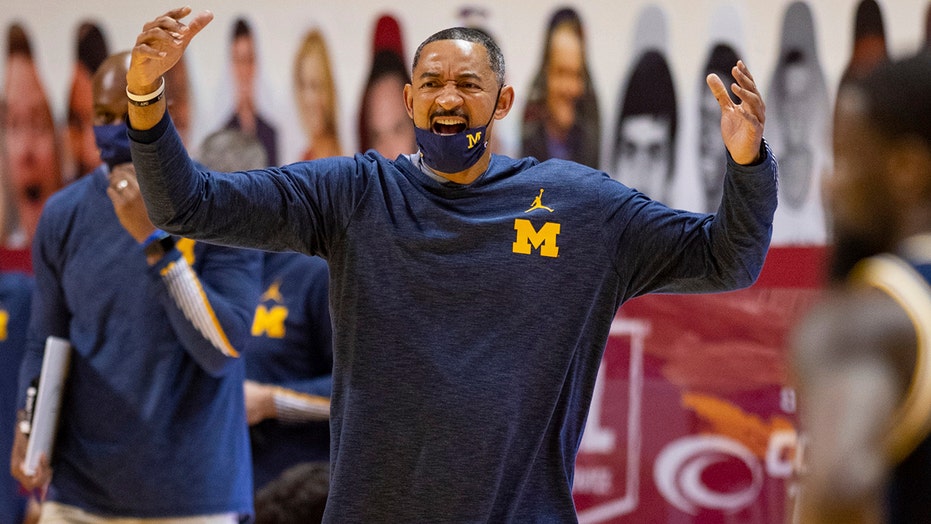 It took nearly the entire season for Michigan to finally leap Baylor into No. 2 behind Gonzaga in the Top 25.

Now, the trick for the Wolverines is to stay there.

They begin a tough finishing stretch by putting their seven-game win streak on the line Tuesday night against fourth-ranked Illinois in a game postponed from mid-February due to COVID-19 protocols. Then, the Wolverines play Michigan State in a home-and-home series — again thanks to the pandemic — to wrap up the regular season.

Then comes navigating the brutal Big Ten Tournament, where four teams are ranked in the top seven, six are in the Top 25 overall, and only three head into the final stretch of the regular season with a losing record.

The rest of the college basketball world has taken notice.

That's what happens when your only loss came against a then-ranked team in Minnesota, and you offset it by beating seven ranked teams, with four of them in the top 10. That includes one top-five showdown, a 92-87 win at Ohio State, with a second in a two-week span coming against the Illini at Crisler Arena.

"Michigan is a terrific team, and they have a lot of answers on both ends of the floor," Indiana coach Archie Miller said. "Tremendous size, inside on offense and also inside on defense. Very difficult to stay in rhythm on offense because of their ability to switch likes and they’re so big at the 3, 4 and 5. They really protect the rim.

"They just keep coming," he continued. "I think as you watch Michigan, you may hang around for a while, but they have the ability to sustain it throughout the course of the game, and they play extremely hard."

They also are getting better. This is an entirely different group from the one that struggled to beat Oakland, Toledo and Penn State early in the season. Their current win streak includes wins on the road against No. 25 Wisconsin, No. 23 Purdue and No. 7 Ohio State and at home against No. 5 Iowa and Rutgers, which was ranked earlier this season.

"I’m trying to do the best I can to preserve their energy with all this quick turnaround and not wearing them down in practice," Howard explained, "but also feeding them a lot of information when it comes to the prep on film and also on walkthroughs. I’ve been impressed with how they’ve responded."

BEST OF THE BEST

The Big Ten and Big 12 have spent the entire season trying to lay claim to the best conference in college hoops. So it's no surprise that nine of the 10 games involving a pair of ranked teams this week involve teams from those two conferences.

In the Big Ten, the showdown between Michigan and Illinois on Tuesday highlights the schedule. But the Badgers visit Purdue the same night, and the Illini turn around and face Ohio State on the road Saturday. Wisconsin also has another brutal test at Iowa on Sunday to cap a week that should help to shake out conference tourney seedings.

The other Top 25 tilt occurs in the Big East when No. 14 Creighton visits No. 10 Villanova on Wednesday night.

Louisville travels to No. 22 Virginia Tech on Wednesday night for a crucial ACC game; the Hokies began the week a game behind No. 11 Florida State and the Cardinals another half-game adrift in the race for the regular-season title.

On Sunday, sixth-ranked Houston plays Memphis in a game that should help untangle the American Athletic Conference standings. COVID-19 pauses have wreaked havoc on the league with Wichita State (13-4, 9-2) out front at the start of the week but having played just 11 league games. The Cougars (20-3, 13-3) are percentage points back in second place while the Tigers (14-6, 10-3) are three games back of them in the win column.

By the end of the week, 15 conference tournaments will be underway with the Ohio Valley crowning its champion Saturday and the champions of the American Sun, Big South and Missouri Valley getting decided on Sunday.

The Valley could get multiple teams into the NCAA Tournament, especially if No. 20 Loyola Chicago (21-4, 16-2) gets beat before the championship game. Drake (24-3, 15-3) will be the No. 2 seed and could be headed for a rubber match with the Ramblers on Sunday after the teams split their home-and-home series.