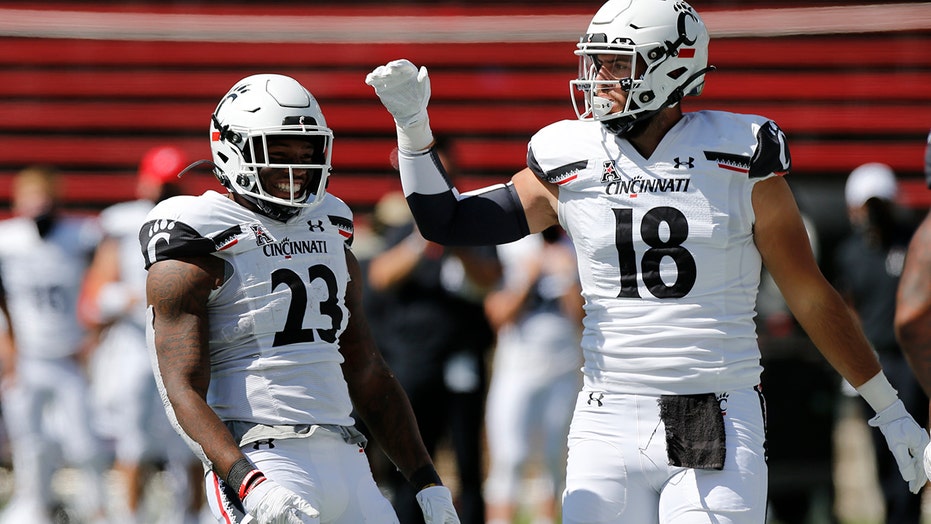 No. 13 Cincinnati had to wait a while to kick off its season. Once it got started, the Bearcats found their stride in a hurry.

“We showed we’re not a team to mess around with,” Doaks said.

Desmond Ridder passed for 196 yards and two TDs for Cincinnati in a game that originally was scheduled for Sept. 3. It was the latest start for a Bearcats season since 1968 when they played at Texas Tech on Sept. 21.

“It was like Christmas morning and you're 8 years old," coach Luke Fickell said. “You feel like you have a good opportunity with the guys you've got, and now we got to see how guys would handle things.”

Cincinnati (1-0) has high hopes for this year after it went 11-3 last season and ranked No. 21 in the final AP poll. It quickly jumped all over the Governors.

Tre Tucker's first career touchdown reception came on a 29-yard shovel pass from Ridder just 1:29 into the game. With 33 seconds left in the first quarter, Doaks took a direct snap on fourth-and-goal from the 1-yard line and ran it in for a 14-3 lead.

Ridder's 38-yard run set up Cincinnati's third touchdown, a 1-yard run by Doaks that made it 21-3 in the second quarter. Doaks had 10 carries for 20 yards.

“It has been a long time since I’ve had that many carries and a chance to get the ball and take control,” Doaks said. “It felt good.”

In the third quarter, Doaks had a 32-yard touchdown catch on fourth-and-2, and Arquon Bush's 31-yard interception return led to Alabama transfer Jerome Ford's 2-yard TD run and a 42-6 lead.

Junior QB Jeremiah Otsvall passed for 202 yards for Austin Peay (0-3), which allowed 55 points in each of its past two games, including last week's 55-0 loss to Pittsburgh.

Freshman running back CJ Evans Jr. had two rushing TDs for the Governors, including a 64-yarder in the fourth quarter.

“We had a chance to play with a top 15 team,” Austin Peay interim coach Marquase Lovings said. "As a competitor, you hate to give up 55 points two weeks in a row no matter who you play but we were able to show that we could play football, even with all the things going on in the world.”

No fans were allowed in Nippert Stadium on Saturday due to COVID-19 concerns, but immediate family members of players and coaches were permitted in the stands.

“I was worried about how the guys would handle the lack of emotion and energy in the stadium,” Fickell said. “They handled it well. They were grateful to have the opportunity to play.”

Doaks has taken on a larger role in the Bearcats offense with the departure of Michael Warren II, who finished his career with 2,918 yards rushing. On Saturday, Doaks contributed to the passing game with four catches for 64 yards and a touchdown, to go along with his three rushing TDs. He had 84 all-purpose yards on 14 touches.

“Gerrid's going to be our leader and we're going to roll with him,” Fickell said.

Fickell praised Ridder's patience on Saturday with not many opportunities to throw the ball downfield. Ridder completed passes to eight different receivers and got the running backs and tight ends involved. Tight end Josh Whyle had three catches for 61 yards.

“You saw what Des can do,” Rickell said. “What he showed was his maturity. Everybody wants shots down the field. When we get more people in the mix, we're a better team.”

Alec Pierce, who led UC with 652 yards receiving last season, was out with a knee injury. Fickell said he might have a timetable for the wide receiver's return on Sunday. With Pierce out, true freshman Jadon Thompson started and had one catch for 18 yards.

Austin Peay's next game is not yet scheduled. The Ohio Valley Conference plans to play a seven-game league schedule in the spring.

Cincinnati hosts Army on Saturday in a game added to fill a void in the nonconference schedule after games against Nebraska, Miami of Ohio and Western Michigan were cancelled due to COVID-19.