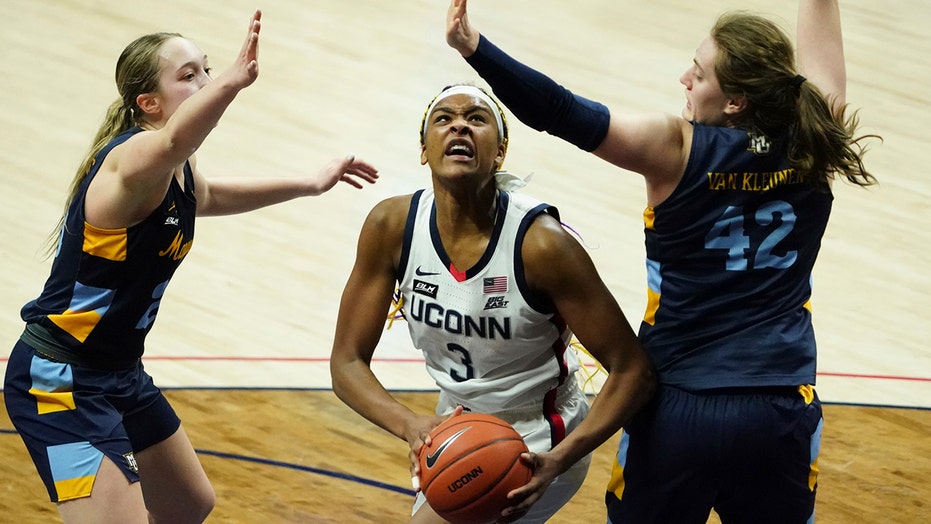 Top-ranked UConn hasn't had to grind out many conference wins this season, making Monday's regular-season finale a valuable learning experience for the Huskies.

Olivia Nelson-Ododa had 19 points and 10 rebounds and Aaliyah Edwards added 16 points and eight boards as UConn held off Marquette 63-53 to finish undefeated in conference play for the eighth straight year.

Freshman Paige Bueckers, who came in averaging 20 points, scored 13 on Monday, but just four after halftime.

"We can't go into every game needing 30 from Paige to win," UConn coach Geno Auriemma said. "I don't know that that's possible. We need our perimeter players to step up and make their share of plays, make their share of shots to enhance whatever it is that Paige is doing."

Camryn Taylor scored 19 points to lead Marquette (17-5, 14-4 Big East), which lost for the first time in six games and will be the No. 2 seed in this weekend's Big East Tournament.

Lauren Van Kleunen had 12 points and Jordan King added 11 for the Golden Eagles, who were blown out by the Huskies 87-58 last month at home.

Bueckers had 30 points in that game.

UConn (21-1, 18-0) came in averaging 83.5 points a game and beating its conference opponents by an average of 35 points. But Marquette slowed the Huskies down, limiting UConn to two fast-break points.

"I thought our defense was much improved from the first game," Marquette coach Megan Duffy said. "We did a much better job of communicating and being in the right position to prevent some easy baskets. We did a good job of keeping them in the half court."

Bueckers had nine points in the first quarter and and the Huskies led 22-11 after 10 minutes, outscoring the Golden Eagles 12-2 in the paint.

But Van Kleunen also scored nine first-half points to keep Marquette within striking distance. The Huskies led 37-25 at halftime thanks to 11 offensive rebounds and 15 second-chance points over the first two quarters.

Marquette kept it close in the second half, twice pulling within single digits after UConn built its lead to 15 points.

"It’s good preparation for the NCAA Tournament, where you never know what’s going to happen," Nelson-Ododa said. "One night can be completely different from the next game and I’m glad we got a taste of it now."

STATS OF THE GAME

UConn dominated the paint behind Nelson-Ododa and Edwards, outscoring Marquette 40-22 down low and outrebounding the Golden Eagles 43-25, including 18-7 on the offensive end. They had 24 second-chance points, while holding Marquette to seven.

Marquette: The Golden Eagles had not lost since early February when they dropped back-to-back games to UConn and No. 25 DePaul.

UConn: The Huskies, who spent the previous seven years in the American Athletic Conference, are 157-0 in league games since falling to Notre Dame in the Big East championship game in 2013.

UConn guard Anna Makarut hasn't played since Jan. 21 with a stress injury in her right leg, but participated in warmups on Monday. ... Guard Evina Westbrook headed to the locker room after taking a hard fall on a layup attempt in the fourth quarter.

UConn and Marquette are the top two seeds in the conference tournament, which will be held this weekend at Mohegan Sun Arena, about 30 miles south of the Connecticut campus in Uncasville.

"We’ll go back (to Milwaukee) and get our players back in classes for a few days," Duffy said. "We’ll be able to recharge before flying out to the Mohegan Sun bubble."