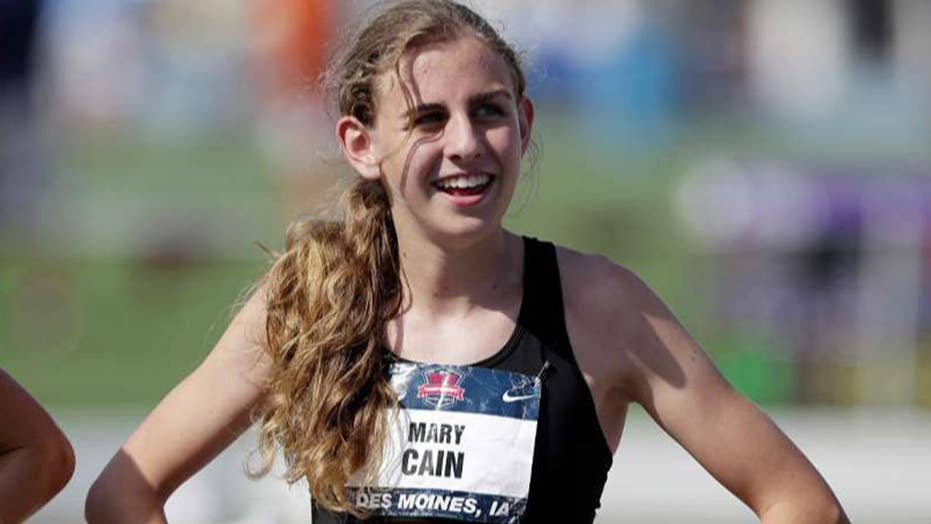 Nike has announced an internal investigation into allegations of “emotional and physical abuse” leveled against disgraced world-class track and field coach Alberto Salazar this week in an op-ed by former Olympic hopeful Mary Cain.

Cain, 23, opened up about the abuse she experienced after joining the Nike-backed running program “The Oregon Project” in 2013 in a video Op-Ed published in the New York Times.

“I joined Nike because I wanted to be the best female athlete ever. Instead I was emotionally and physically abused by a system design by Alberto and endorsed by Nike.”

Mary Cain of the U.S. runs during the 3000m final during day three of the IAAF World Junior Championships at Hayward Field on July 24, 2014 in Eugene, Oregon.  (Getty)

Cain said that she was given an “arbitrary” goal of 114 pounds because she was told by Salazar’s team that the lighter she was, the faster she would run. But she alleged that, despite being a world-renowned program, no one that made these decisions was a “certified sports psychologist” or nutritionist they were just “a bunch of people who were Alberto’s friends.”

She claims that while training under Salazar, she was directed to take birth control and diuretics to lose even more weight.

The damage to her body was becoming so severe, she began to experience physical and mental changes.

“When young women are forced to push themselves beyond what they’re capable at their given age they’re at risk for developing RED-S (Relative Energy Deficiency in Sports). Suddenly you realize you’ve lost your period for a couple of months and then a couple months becomes a couple years and in my case it was a total of three.”

Cain told the Times that she was so weak she broke five bones and started to develop suicidal thoughts.

She continued: “Some people saw me cutting myself … Nobody really did anything or said anything.”

Cain claimed that in May 2015 she hit the point of no return. After a poor performance at a race she publicly shamed by Salazar and accused of gaining weight. Later that day, she told her team that she had been cutting herself and was allegedly told in response that “they just wanted to go to bed.”

She said that at that moment she realized that the “system is sick.”

“I wasn't even trying to make the Olympics anymore, I was just trying to survive.”

Salazar was recently banned for four years after several doping incidents but just last month the program itself was ended after it emerged that Salazar was pushing his athletes too hard. This included allegations similar to Cain’s in that he allegedly asked runners to take prescription drugs to increase their performance.

But Cain argues that Nike’s decision to shutdown the Oregon Project is just a bandaid.

“They’re not acknowledging that there is a systemic crisis in women's sports and at Nike in which young girls bodies are being ruined by an emotionally and physically abusive system,” she told the Times.

Nike issued a statement calling the allegations “deeply troubling” but went on to say that Cain never raised the issue with them and tried to “rejoin” the team in April.

“These are deeply troubling allegations which have not been raised by Mary or her parents before. Mary was seeking to rejoin the Oregon Project and Alberto’s team as recently as April of this year and had not raised these concerns as part of that process. We take the allegations extremely seriously and will launch an immediate investigation to hear from former Oregon Project athletes.”

Cain responded to this statement and told the Times that her attempting to rejoin Salazar’s team shows the extent of the emotional abuse she underwent.

“I was the victim of an abusive system, an abusive man. I was constantly tormented by the conflict of wanting to be free from him and wanting to go back to the way things used to be, when I was his favorite.”

She continued: “When we let people emotionally break us, we crave their approval more than anything.”

Salazar denied Cain’s allegations, according to the Times.