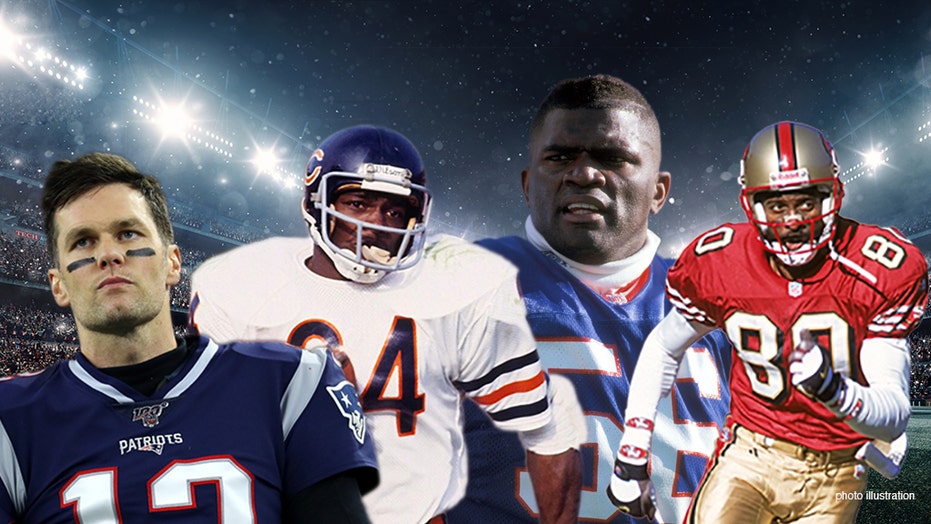 There have been thousands of players fortunate to wear an NFL uniform -- the majority of them were average, many of them were good, some happened to be great, but very few have been legendary.

It was hard enough to put lists together of the four greatest players for every NFL franchise. Each team has produced countless Pro Bowlers, many All-Pros, and several Hall of Famers, and whittling down teams to just their top four was difficult to do.

Now, imagine how challenging it could be to narrow it down to the four best players the league has ever seen -- that's nearly impossible.

Read below to see which players made the NFL's all-time Mount Rushmore.

It's a no-doubt-about-it selection. Yes, Tom Brady, arguably the greatest quarterback of all-time, is on the NFL's Mount Rushmore. The future Hall of Famer spent 20 seasons with the New England Patriots, played in nine Super Bowls, and has six titles, which is the most of any player in NFL history. Brady also has a league-record four Super Bowl MVPs.

Brady, the 199th draft pick in the 2000 NFL Draft, is also a three-time regular-season MVP, 14-time Pro Bowler and five-time All-Pro, three of which are first-team selections. Brady was the NFL Comeback Player of the Year in 2009, he led the league in passing yards three times, passer rating twice, and passing touchdowns and completion percentage once each.

Now a member of the Tampa Bay Buccaneers, Brady was a part of the NFL's 2000s All-Decade Team, and he was a unanimous selection for the 2010s All-Decade Team. He was also a lock for the NFL's 100th Anniversary All-Time Team. Five years after he retires, Brady will undoubtedly be a first-ballot Hall of Famer, and he will be inducted into the Patriots' Hall of Fame.

Jerry Rice is more than just the best wide receiver to have ever played for the 49ers -- he’s also arguably the best overall player to have ever suited up in an NFL uniform.

Drafted by the San Francisco 49ers in the first round of the 1985 NFL Draft and in the midst of its most successful era, Rice helped bring home three Super Bowl titles during his 16 seasons with the franchise.

A 13-time Pro Bowler and 10-time First-team All-Pro, Rice might just be the most decorated receiver in the league. He holds nearly every NFL record for the wide receiver position, including receptions, touchdown receptions, and receiving yards.

Lawrence Taylor is arguably the best linebacker to ever play in the NFL.

The New York Giants selected Taylor No. 2 overall in the 1981 NFL Draft. He was in the same class as defensive backs Kenny Easley and Ronnie Lott, both of whom went on to produce Hall of Fame careers.

Taylor racked up 132.5 sacks in his career, including 20.5 during the 1986 season. He was a 10-time Pro Bowler, an eight-time All-Pro selection, and won the Defensive Player of the Year four times not to mention winning two Super Bowls. He was also one of the few defenders who have won an NFL MVP award.

Taylor was a part of the 75th and 100th All-Time Teams, as well as the '80s All-Decade Team. He was inducted into the Hall of Fame in 1999, and into the Giants' Ring of Honor. Taylor's No. 56 jersey is retired by the franchise.

Walter Payton is regarded as the greatest running back in league history. (Photo by Focus on Sport via Getty Images)

Walter Payton, nicknamed "Sweetness," is regarded as one of the greatest running backs in NFL history. During a career that spanned 13 seasons with the Bears, Payton was a nine-time Pro Bowler and eight-time All-Pro selection, seven of which were first-team honors. Payton missed only one game in his career because of a coach's decision, even though he was eligible to play.

Payton, the NFL MVP in 1977, was also the NFL Man of the Year in 1977 -- now called the Walter Payton Man of the Year Award -- which is presented to a player in the NFL each year to honor their volunteer and charity work, as well as their performance on the field.

Payton was the NFL's rushing leader and rushing touchdowns leader in 1977, he led the league in rushing attempts four times, and he's a member of the 1970s and 1980s All-Decade teams, as well as the NFL's 75th Anniversary and 100th Anniversary All-Time teams.

The Bears retired Payton's No. 34 jersey, and he was enshrined into the Pro Football Hall of Fame in 1993. In September 2019, the Chicago Tribune named Payton the greatest Bears player of all-time.