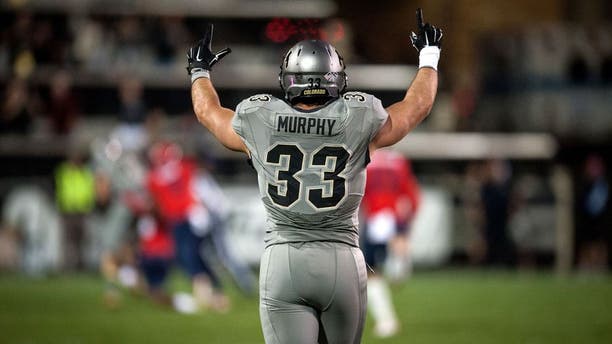 BOULDER, CO - OCTOBER 17: Fullback Jordan Murphy #33 of the Colorado Buffaloes celebrates after a nice play against the Arizona Wildcats at Folsom Field on October 17, 2015 in Boulder, Colorado. (Photo by Dustin Bradford/Getty Images)

Jordan Murphy hopes to make the NFL, despite the odds stacked against his favor. But Murphy, a former Colorado fullback, is used to beating the odds after surviving the Aurora Massacre in 2012.

Murphy was in the Colorado theater showing "The Dark Knight Rises" when shooter James Holmes, dressed in a movie-themed costume and wearing tactical gear, took a dozen innocent lives. Over 70 individuals were injured in the tragic shooting.

Murphy knows it's a "real long shot" for him to make the NFL despite a lack of on-field production during his collegiate career. But he recently said he learned he had "plenty of time to do things" after that fateful evening, which he only narrowly survived. Here's what he told ESPN about the experience:

Murphy's quote about his height, and how if he were any taller he wouldn't be alive today, offered particularly interesting life perspective.

While Murphy failed to record a carry for the Buffaloes during college, he feels he can provide great value to an NFL team on special teams or any other personnel grouping a professional team sees fit for him.