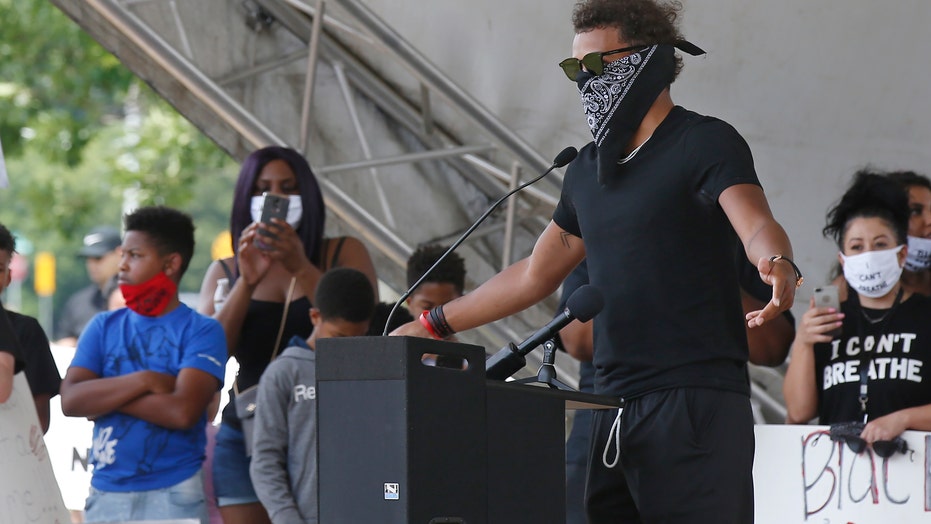 Greg Palkot reports on the international response to the killing and riots.

NBA All-Star Trae Young spoke at a peaceful protest of racial injustice and police brutality in his hometown on Monday.

Young, the former University of Oklahoma star who now plays for the Atlanta Hawks, briefly addressed several hundred people at Andrews Park about the deaths of George Floyd and others.

Floyd, a black man, died May 25 after a white Minneapolis police officer pressed his knee into Floyd’s neck while Floyd was handcuffed and saying that he couldn’t breathe. His death sparked protests in Minneapolis and around the country, some of which became violent.

Norman mayor Breea Clark and police chief Kevin Foster were among the other speakers at the Norman rally.

Young acknowledged that he doesn’t often speak out on social issues and credited his sister, Caitlyn, for helping him come out of his shell. At one point, Young held up a “Black Lives Matter” sign.

“I’m not used to doing this," he said. "I’m not very open about what I see or the things that go on in this world very often, but for me, even though I’m just 21 years old, I feel that it was necessary. This is bigger than me, and I feel like this is a big step in the right direction.”

Young’s NBA city of Atlanta has been rocked by protests, fires, and looting. He said after he left the stage that he has mixed feelings about those protests.

“I play in Atlanta, a black cultured city where people are looting there and it's messing up the city," he said. "So I see both sides. You can protest the right way and peacefully, which I believe it should be, but I also see where it hasn't worked."

He believes better days are ahead.

“I feel like justice will be served and changes will be made if we all come together,” he said. “This is us doing it. This is the first step.”