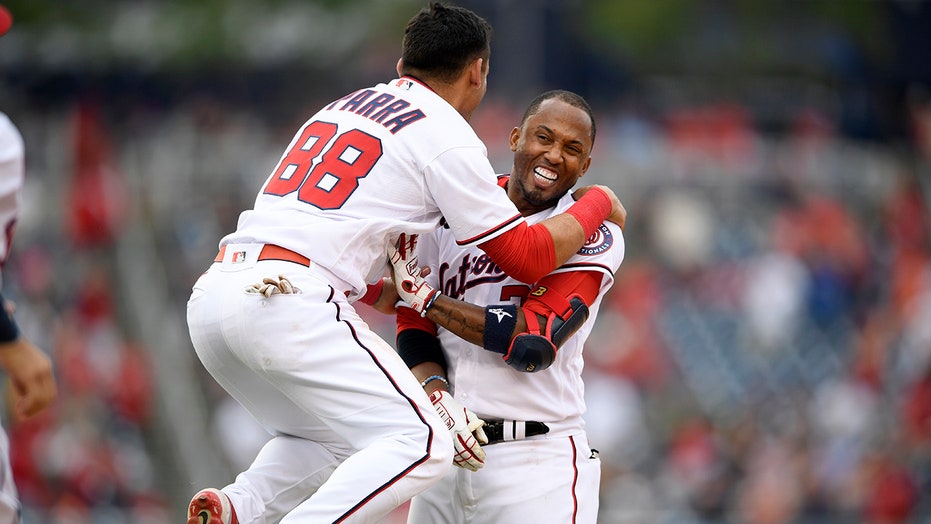 The Washington Nationals needed a win Sunday to end their losing streak.

To manager Dave Martinez, this walk-off victory had a greater meaning.

Alcides Escobar homered in the eighth inning and hit a game-ending single in the ninth Sunday as the Washington Nationals wrapped up a disturbing weekend with an 8-7 win over the San Diego Padres.

A day after the game was suspended in the sixth inning because of a shooting outside Nationals Park, the Padres completed a 10-4 victory. Washington then came back to end a six-game losing streak.

"I think it means more to myself and the players knowing that the fans came back after yesterday," Martinez said of Sunday's crowd of 27,221. "They came to support us and it was huge. It was awesome. Our players, they feed off that and it was a good day for Nats fans and the Nationals."

Tres Barrera singled off Mark Melancon (2-2) with one out in the ninth and, after failing on a bunt attempt, Victor Robles was hit by pitch. Escobar hit a flyball that center fielder Trent Grisham couldn't corral near the warning track and Barrera scored.

"Melancon throws a lot of cutters and curveballs and I was actually sitting on the breaking pitch," Escobar through an interpreter. "And when he got ahead, I was just looking for a pitch in the zone that I could make solid contact with and I was fortunate to make solid contact on that pitch."

Escobar was acquired from the Royals in a July 2 trade. It was his first homer since 2018 when he was with Kansas City.

San Diego tied it at 7 in the ninth when pinch-runner Jorge Mateo stole second and third without a throw and scored on Grisham's two-out, bloop single off Brad Hand (5-2).

Escobar led off the eighth with a homer and Juan Soto's two-run drive later in the inning gave Washington a 7-6 lead.

"We just couldn’t hold the lead today, and that hasn’t happened very often," Padres manager Jayce Tingler said. "We’ll take our chances with the back end of our bullpen any day and today we just weren’t able to hold the lead."

It was Soto’s third homer since participating in the Home Run Derby at the All-Star Game. Soto and Josh Harrison had three hits apiece for Washington.

Saturday's game was halted with the Padres leading 8-4 in the middle of the sixth inning.

"I think last night was obviously something none of us had ever experienced," longtime Nationals star Ryan Zimmerman said. "Coming to finish a game under those circumstances was a little bit weird for all us, but you have to move on and play the game. But it was definitely different."

When the shots were heard, it was not immediately clear where they were coming from. Star shortstop Fernando Tatis Jr. was one of several Padres who helped shepherd fans from the stands into the San Diego dugout for shelter in what became a chaotic scene as the crowd scrambled for safety.

Tatis had his third four-hit game of the season and scored twice for the Padres, and Tommy Pham had three hits and two walks.

Pham singled in a run in the seventh after play resumed and a second scored on right fielder Soto's throwing error on the play.

Zimmerman, who sat out the abbreviated 2020 season, hit his 10th homer season for the Nationals.

Reliever Craig Stammen (4-2) pitched a scoreless fifth inning for the win. Starter Blake Snell, who missed his last start due to a digestive issue, was reinstated from the injured list Saturday and allowed four runs on six hits and four walks in four innings.