Garrett made the allegation during the appeal of his indefinite suspension Wednesday, ESPN reported. The allegation wasn’t made in any of the days after the brawl, though Garrett was asked by reporters whether Rudolph said anything to him that made him go berserk.

Browns offensive lineman Joel Bitonio was one of Garrett’s defenders after a report of the allegation surfaced Thursday. He told reporters that if Garrett said Rudolph used a racial slur then he believes him, according to the Cleveland Plain-Dealer.

Browns defensive tackle Sheldon Richardson also believed that it wouldn’t be something Garrett would lie about.

Though he said he didn’t know anything about a racial slur being used, Richardson was sure a slur would have been a reason why Garrett acted the way he did.

“Nah, dude grabbing at my facemask and underneath my facemask and grabbing at my Johnson and stuff like that, definitely,” Richardson said. “An ass-kicking was coming, it’s just that simple. You’re trying hurt me, I’m hurting you. An eye for an eye, a tooth for a tooth, everyone deaf, dumb and blind at the end of the day, so that’s the way you want to go, we can take it that way.” 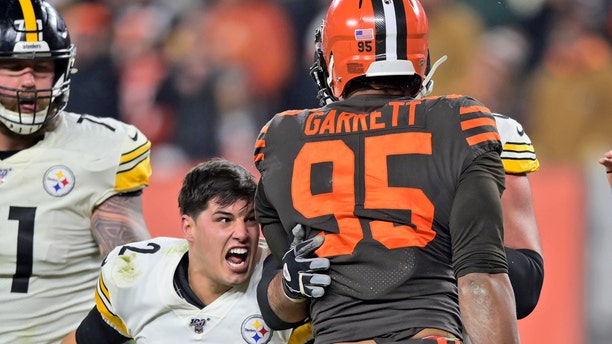 Cameron Heyward said his quarterback was being “villainized,” according to ESPN.

“He was pretty distraught. Mason came to me and said, ‘I did not say that',” Heyward said. “I think we knew that using that as an excuse is not right.”

Heyward added: “He's being villainized by it. He said, ‘I'm going to be labeled as that.’ I just don't think that's right. That's my teammate. I'm going to fight for him. I'm going to do what's best for him. That kid made a bad mistake, but he never crossed the line when he talked about a racial slur.”

Alejandro Villanueva also defended Rudolph, according to The Athletic.

“I think using any kind of racial slurs has no place in our country whatsoever, but I think fabricating a story where somebody used a racial slur is a lot more damaging,” he said.

While Garrett said he "knows what he heard,” the NFL said it found “no such evidence” that Rudolph used a slur. Garrett’s indefinite suspension was upheld. 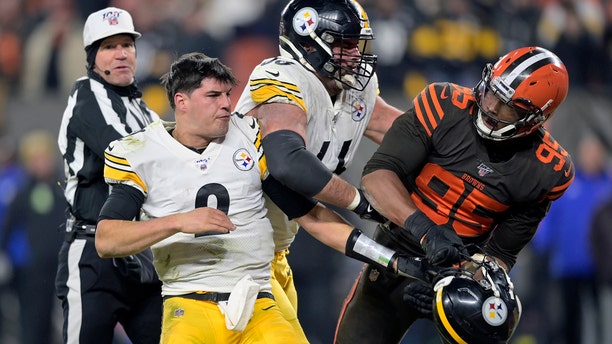 “As we’ve consistently stated, our organizational support for Myles will continue,” he said. “He’s a man of high character and unquestionable integrity. He was open and honest with us about the incident from the start. He has taken accountability for his actions on Thursday night and this situation will not define him. As an organization, our focus going forward remains on the task-at-hand, which is preparing for the Miami Dolphins.”