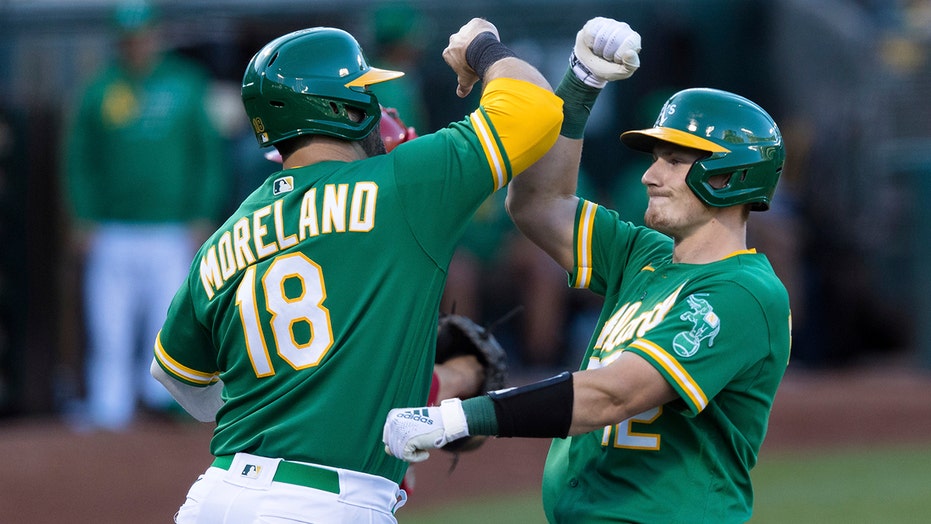 Sean Murphy hit a two-run homer, Mitch Moreland had a two-run single and the Oakland Athletics held off the Los Angeles Angels 8-5 on Monday night.

Sean Manaea overcame an early home run and pitched into the sixth inning to help the AL West leaders improve to 41-27 – the best record for the A’s through 68 games since 2014.

"We’ve been able to string some hits together or create opportunities all year," Moreland said. "When we’re able to score runs like that early, bunch them together, with our starters and our pitching staff, we’re going to win a lot of games. Tonight was proof of that."

Juan Lagares hit his first home run of the season for the Angels, who had won six straight and eight of nine. David Fletcher and José Iglesias had four hits apiece.

Moreland singled off starter Dylan Bundy in the second for career hit No. 1,000. Murphy followed with his seventh home run, a towering drive to right. Moreland added his two-run single in the third.

Manaea (6-2) had five strikeouts in 5 2/3 innings and won his third straight. The lefty allowed nine hits and one run.

"They made him work," A’s manager Bob Melvin said. "He gave up some hits but found a way to pitch around it and get some outs."

Los Angeles rallied for four runs against Oakland's bullpen in the seventh. Jared Walsh had a two-run double and Fletcher singled to make it 8-5.

Jake Diekman struck out Walsh with two on to end the eighth. Lou Trivino retired three batters for his 11th save.

Bundy (1-7) ended a 10-start winless streak his last time out but struggled again. He allowed seven runs and five hits in 2 1/3 innings, raising his ERA to 6.98.

"Velocity was down, that was obvious," Angels manager Joe Maddon said. "I don’t think his velocity played up to the point where the other pitches were effective. I just didn’t see that normal jump on the fastball."

Angels center fielder Mike Trout leads all American League outfielders and is second overall in the AL with 706,503 votes in All-Star balloting released Monday, although Maddon thinks it’s unlikely Trout would be able to play in the game. Trout has been on the injured list with a right calf strain since May 18 and is at least a month away from returning. The All-Star Game is July 13 at Coors Field in Colorado. "It would be kind of a stretch, I think, right now from what I’m hearing," Maddon said. "Who knows how things could change? But you just really want to make sure that this injury is healed properly. Just to push it to get him in the All-Star Game to me would not be wise."

Angels: 3B Anthony Rendon injured his triceps diving for Chad Pinder’s double in the fifth. … Trout had another examination that showed things are headed in the right direction. "Eventually soon he’ll be able to jog a little bit, but the baseball activities are still a little far away," Maddon said. … LHP José Quintana threw 25 pitches in a bullpen session and is nearing a return, according to Maddon.

Athletics: Pinder left after getting hit behind his left ear by an 82 mph splitter from Junior Guerra in the seventh. Pinder was down for several moments before being helped off the field. It was the second straight batter hit by a pitch from Guerra. "He’s not in concussion protocol right now," Melvin said. "Pretty scary because he’s had a few concussion issues in the past. We’ll monitor him tonight." … RHP J.B. Wendelken will begin a rehab assignment with Triple-A Las Vegas on Thursday as he works his way back from a strained left oblique. … CF Ramón Laureano (strained right hip) did some running and throwing in the outfield. Laureano will run the bases Tuesday and could be activated off the injured list Wednesday.