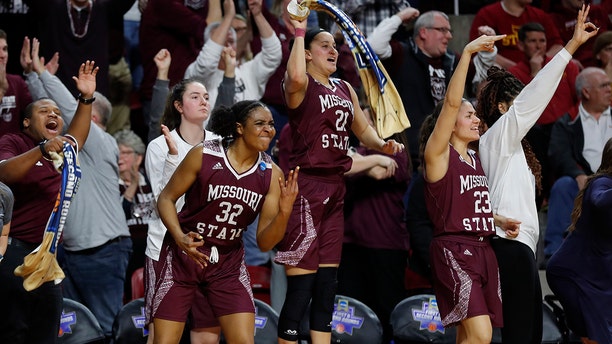 FILE - In this Monday, March 25, 2019, file photo, Missouri State forward Jasmine Franklin, left, guard Sydney Wilson, center, and guard Mya Bhinhar, right, celebrate a 3-point basket by guard Sydney Manning during the second half against Iowa State in the second round of the NCAA women's college basketball tournament, in Ames, Iowa. In the first week of December 2019, Missouri State is ranked for the first time in 15 years. Franklin, Wilson and Bhinhar are returning players from a squad that reached last season's Sweet 16. (AP Photo/Matthew Putney, File)

Missouri State coach Amaka Agugua-Hamilton was playing for Hofstra the last time the Lady Bears appeared in the poll 15 years ago.

Now, the first-year coach has the team in The Associated Press women’s basketball Top 25 this week at No. 22. She inherited a really good squad that returned 12 players from last season’s Sweet 16 appearance.

“It’s tough because expectations are high as they had a great season coming off a Sweet 16,” Agugua-Hamilton said. “Coming in with a new philosophy and style of play than the last coach. I want them to buy in and believe in my vision.”

Agugua-Hamilton said that she’s tweaked a few things and that it was made easier because the players took to her and the staff.

“It made it an easy transition,” she said.

Agugua-Hamilton said that one of the goals for the season was to get the Lady Bears ranked — something she experienced many times as an assistant at Michigan State. That goal was reached Monday — the Lady Bears first ranking since the 2004 season.

“It has been 15 years, and I’m really excited that our program is being recognized and our players are being recognized for their hard work,” she said. “I think it’s hard to get ranked as a mid-major. When it happens its super exciting. My message to them is I want to stay ranked. Want our RPI to stay where it is. Build our resume for the NCAA Tournament.”

The Lady Bears’ (7-1) only loss this season came at Oregon State in the finals of the Preseason WNIT Tournament. To get to the final, Missouri State won at Boise State and Oklahoma.

“It’s almost like we played a postseason tournament early in the season. It helped us preparation wise,” Agugua-Hamilton said. “At the end of the day, we have a really good team and are not playing our best basketball yet. We got a lot of things to work on and continue to improve on defensively.”

The Lady Bears host Wichita State on Wednesday in their next game.

While Missouri State made the poll for the first time in a while, Stanford moved to No. 1; the Cardinal’s appearance atop the poll is its first in seven years.

“It’s exciting for our team to be ranked No. 1,” Stanford coach Tara VanDerveer said. “For our team, the No. 1 ranking comes with confidence and humility. We're a humble team. We could have lost games this season so far, but found ways to win. I feel like I'm on the Peloton bike in the first five minutes of the ride, but there’s a lot of pedaling left. I love when I'm on the top of the leaderboard. It motivates me to pedal harder. It motivates us to work really hard.”

The Cardinal will have to wait a little bit to defend their ranking as they are on exam break for the next two weeks. VanDerveer said it’s a chance to fine tune some things and get better in areas.

MILESTONES: Doug Bruno, coach of No. 16 DePaul, earned his 700th career win at his alma mater on Sunday in a victory over rival Northwestern. Bruno is one of three active coaches in Division I to win 700 games at only one school, joining UConn’s Geno Auriemma and Villanova’s Harry Perretta. ... Oregon State coach Scott Rueck earned his 500th career victory on Saturday against Liberty.

BIG TEN SUCCESS: With Michigan re-entering the Top 25 on Monday, the Big Ten has four teams in the poll. The conference has gotten off to a great start this year, winning 80% of its games, so far. That’s the best start in the 39-year history of women’s basketball in the Big Ten. Ten of the 14 schools are undefeated or have just one loss.