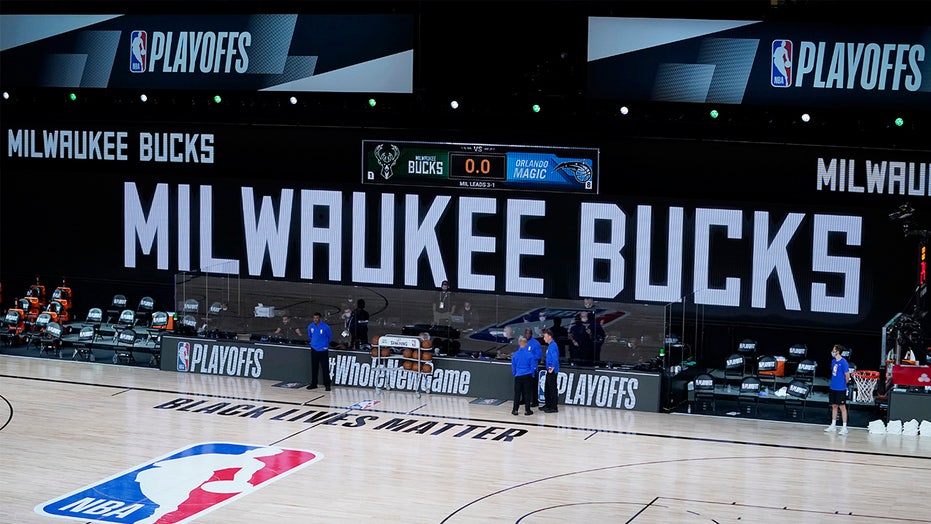 Trump takes NFL, NBA to task about kneeling during the national anthem

The NBA postponed all of Wednesday's playoff games after the Milwaukee Bucks opted to boycott Game 5 of their series against the Orlando Magic and other teams quickly followed suit in protest of the police shooting of a Black man in Wisconsin.

The players protested the Sunday shooting by Kenosha police of Jacob Blake, a 29-year-old Black man. Bucks guard George Hill told The Undefeated that "We’re tired of the killings and the injustice."

The game was scheduled for 4 p.m. ET, and at that time the Bucks still weren't on the court, so NBA officials decided to go into their locker room to check on the players.

According to a report by The Athletic, Bucks players were trying to reach out to the attorney general of Wisconsin, Josh Kaul, and the Magic players said that they would not accept a forfeit win after the Bucks left the court.

The Bucks put out a statement about their decision to boycott the game.

"Despite the overwhelming plea for change, there has been no action," the team said. "So, our focus today cannot be on basketball."

Shortly after the Bucks' decision, reports came out that players on both the Houston Rockets and Oklahoma City Thunder were planning to boycott Game 5 game of their Western Conference series, and ESPN reported that the Los Angeles Lakers were going to have a team meeting to discuss boycotting their matchup against the Portland Trail Blazers later on Wednesday night.

The NBA and NBPA confirmed that all three games are now officially canceled. They put out a joint statement saying that games will not be played due to boycotting.