The elusive black cat that stormed the field during the Monday Night Football match up between the New York Giants and the Dallas Cowboys, evading capture by stadium security, is still on the loose, prompting MetLife officials to call on the help of a no-kill shelter.

MetLife Stadium issued a “#BLACKCAT UPDATE” to Twitter on Wednesday announcing that officials had laid out several humane traps throughout the facility Tuesday morning in hopes of catching the infamous feline “to no avail.”

Hoping to locate and remove the cat, officials contacted Puppy Kitty NYC, a nonprofit rescue organization based in New York. 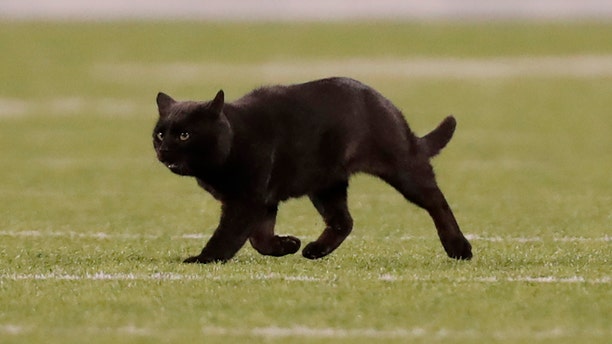 A cat runs on the field during the second quarter of an NFL football game between the New York Giants and the Dallas Cowboys, Monday, Nov. 4, 2019, in East Rutherford, N.J. (AP)

“We are hopeful that together we can find the black cat that we all fell in love with Monday night,” the statement read.

The group posted to Instagram early Thursday morning that several traps have already been set.

“We have traps set so paws crossed we can get this little guy!”

Based on earlier posts, it appeared that the group was interested in working with the stadium to capture the cat immediately following the game.

MetLife Stadium also dismissed earlier reports citing an employee at the facility who claimed that there were over 300 feral cats being housed and fed by the stadium.

“There have been erroneous reports in the media that MetLife Stadium houses and feeds 300 cats, which is simply not true,” the statement read.

It did, however, note that the Meadowlands Racetrack, located in the same complex, has a Trap, Neuter, Release (TNR) program that feeds approximately 30 barn cats, which help to control the rodent population.

“We are grateful for the outpouring of support and will continue to work with PuppyKittyNYCity to try and locate the Black Cat.”